Community Support Professional, Nixon Darbouze believes in the power of the vote. In helping to coordinate self-advocacy meetings and activities at AHRC New York City’s Stephen B. Siegel Day Center, Nixon encourages frequent and informed participation in the political process. With Nixon’s support, the self-advocates have also organized a bowling tournament for Brooklyn self-advocacy groups, participated in many Self-Advocacy Association of New York State events, and participated in rallies during the #bFair2DirectCare campaign last year.

“The idea is to teach [the self-advocates] about their rights,” Nixon said during a discussion with Matthew Estep, AHRC NYC’s Self-Advocacy Advisor, who recently paid his first visit to the program’s self-advocacy meeting. “A lot of the time they say what they want and it’s something that they have a right to do, but they may not have access to it or don’t know how to get access to it.”

One of the group’s current projects is to increase their level of community access by working to obtain IDNYC cards. “Most of the people we support do not have a state ID,” Nixon said. “We have been in communication with the nearby library and seeing if they can come over here and help us.”

Members of the group also spoke proudly about the bowling tournament they organized last year. “It was a big accomplishment for us. It was the first tournament organized for all of the Brooklyn self-advocacy groups,” said Nixon.

James Downey explained that the Siegel self-advocacy group even made their own t-shirts for the tournament. “I bowled a 100-something,” he smiled.

“The main thing is that we had fun and we got to meet other representatives from other programs,” said Lisa Jost, the group’s spokesperson. 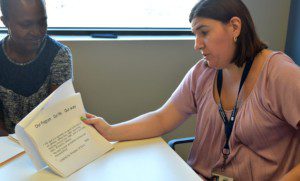 Perhaps the most significant step forward the Siegel Self-Advocates have taken was an election for group president that took place last year, coinciding with the 2016 U.S. presidential election. “It was an important way to introduce the concept of elections and give a chance to demonstrate how they work,” said Nixon. The two election candidates, Lisa Jost and Laurence Exantus both made posters, campaigned for themselves, and even held debates. Although Laurence ended up winning the election, Lisa’s interest in politics continues. She now works as a poll clerk for the Board of Elections on voting days, most recently for the mayoral primaries on September 12th.

The elections were such a success last year that the group plans another round in 2017; two debates and the voting day have already been scheduled. Nixon plans to continue working with the self-advocates to support them as they find ways to achieve their goals. Matthew Estep has encouraged Nixon to share the Seigel Center’s election model with other self-advocacy groups across AHRC NYC.

“The election was a learning experience for everyone,” Nixon said. “We respected that other people chose who would be the president and are still friends and working together. That’s something we don’t see enough of in real political life.”