Andrew Kaen had gone 11 years without holding a full-time job when he came to AHRC New York City. Academics were no problem for Andrew, who earned a degree in sociology from Ithaca College. But he recognized that his difficulty socializing with colleagues prevented him from thriving in the workplace.

“This deficit has been with me since childhood, affecting my ability to make friends,” he said. “It followed me to college, where I had difficulty getting along with roommates, and as an adult, affected my performance in the workplace and my ability to gain and hold a job.” Andrew held two full-time jobs after college, but they ended in a manner “which completely shattered my confidence,” he recalled. Temporary jobs were unsatisfying.

Andrew began attending a work readiness program at a technology company designed to help people on the autism spectrum succeed in the workplace. “With the support and guidance of the program leaders, I learned skills I should have acquired a long time ago — skills that involved teamwork, communication, and developing an awareness of my own behavior as it impacts others,” Andrew said. Upon completion of the program, he accepted a part-time job with AHRC New York City’s Compliance Department, where he put his computer skills to work.

Thanks to a partnership with ACCES-VR, today Andrew works full-time as a Video Reviewer/Analyst at AiCure, a company which uses artificial intelligence to optimize patient behavior and to ensure patients adhere to their medication. Andrew appreciates the stress-free environment, where he can work independently. “My goal is to grow on the job,” he said. 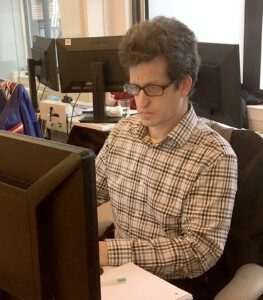 Recognizing that people on the autism spectrum may struggle with a traditional job interview, Michele suggested to AiCure that a Work Tryout (WTO) would allow candidates to showcase their skills.

“We felt strongly that the need we had would suit a candidate with autism,” said Conor O’Donoghue, a Finance and Accounting Director, who was instrumental in AiCure’s hiring process. “However, having never worked with employees with autism before I was a little uncertain about what to expect from the candidates, how to manage them, and how to evaluate them. The WTO program significantly reduced the uncertainty and risk from my perspective as it allowed us to make an informed decision based on their performance in the role over a period of time.”

Andrew and five other workers with autism work on a data annotation and labeling team at AiCure. The company’s clinically-validated platform works on smartphones to optimize patient behavior and ensure patients adhere to their medication. Medical professionals and clinical research studies utilize AiCure’s technology to confirm if patients are taking medication as prescribed.

Data collection and annotation are critical parts of building the artificial intelligence algorithm that makes AiCure’s platform effective. Andrew’s team analyzes videos of patients taking their medication in order to provide AiCure’s algorithm with the data it needs. This work requires incredible attention to detail and is critical to the success of AiCure’s software.

“Employers are now seeing the unique talent pool which is underemployed and unemployed,” said Michele, who has spent 30 years at AHRC. And there’s no better feeling than watching Andrew and the other workers thrive at AiCure. “It’s a life-changing experience,” she said.

ACCES-VR recognized AiCure at its NDEAM breakfast recently for its commitment to hiring people with disabilities.