By 1985, Natalie Golub had already made a name for herself at AHRC New York City, when, according to her original residential file, she moved into the newly-opened Bober Community Residence in Brooklyn. She was placed there on December 16, which coincidentally was her birthday. She was 53 years old. Previously she had lived with her aging father, Barry Golub, in her childhood home on nearby Church Avenue. Her father was an active member of several AHRC Workshop Parent Committees and had enrolled Natalie in a variety of AHRC recreational programs; records indicate that she particularly liked going on trips. Reports also reveal that Natalie was not too keen on the idea of moving away from her father. A habilitation assessment dated earlier that year reveals: “Although [Natalie] understands her father’s reasons [for wanting her to move to a residence], she does not accept them, claiming that her grandfather lived to be 94, so why shouldn’t her father?”

At the time of her move, Natalie was an established artesian at the New York League Work Center located on West 13th Street in Manhattan. She had been employed there since 1958 in the position of Supervisor’s Helper in the bench-work section. Her specialty: candle making; her salary: $400/month. Natalie was a good worker but not a particularly good co-worker; the 1986 habilitation assessment revealed that “interpersonal relations are not one of her strong points.” 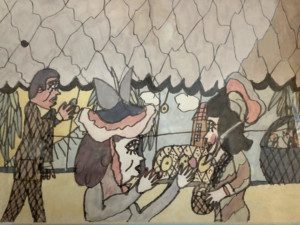 Artwork depicting passersby in a metropolitan setting, made with marker by artist, Natalie Golub

So it should come as no surprise that after Natalie retired from her long career at the New York League, she struck out on her own as an artist in her own right. By this time, Natalie was living at the Fineson Residence, conveniently located near Union Square. In short order, Natalie recognized a business opportunity and an outlet for her prodigious output of paintings and drawings: the Union Square Green Market. Natalie became a regular fixture at the market and in no time became somewhat of a local celebrity. She was known to all the vendors and was a familiar presence to many of the shoppers. She had a no-nonsense sales pitch that went something like: “YOU WANNA BUY MY PICTURES!?!” And it worked–Natalie routinely sold her art: $5 for a small drawing, $10 for a large piece. She was NOT interested in bargaining. The price was the price–take it or leave it. It is truly a testament to her salesmanship that almost everyone walked home with a “Natalie.” 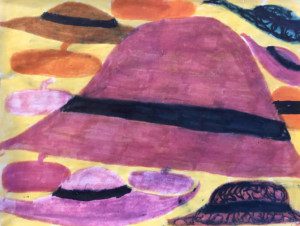 She continued making her art well into her 80s, although her style evolved. As she got older, her drawings became less complex and less detailed. Once filled with people in specific situations or activities, they became more likely to be simply a colorful canvas of rows of identical birds, or pairs of shoes or a grouping of her signature berets.

Artists often outlive their legacy. Not so for Natalie Golub. Over time, her trips to Union Square grew less frequent, but on warm and sunny days, when she was escorted by staff to re-visit the Green Market, there were always a few vendors and patrons who recognized her and respectfully acknowledged her, inquiring after her health and reminding her of her former notoriety.

I once spotted one of her drawings in a bakery van near my home in Brooklyn. When I mentioned to the driver that I knew the artist, without missing a beat she replied: “You know Natalie?” “Oh, yes!” I replied. Like so many others, I knew Natalie.