SAORI Arts NYC Brings the Pleasures of Weaving to the Bronx

“I like weaving because it’s fun,” said Angel Franceschi. “I like picking different colors and different patterns.”

Weaving with a Purpose

SAORI is a freeform method of weaving developed in Japan the 1960s by homemaker Misao Jo, who stumbled upon a style that “embraced imperfections and spontaneity.” This intuitive and engaging technique was perfectly suited for people with motor challenges and other disabilities. Yukako Satone, a Japanese designer, brought SAORI to New York in 2001, and in 2016 she began SAORI Arts NYC with colleagues Ria Hawks and Brandy Godsil.

“We were founded to nurture creativity and self-confidence in people with disabilities or chronic illnesses through SAORI weaving,” explained Maurine Packard, M.D., SANYC’s Treasurer, and a retired pediatric neurologist. Maurine spent her career assisting children with serious medical conditions and their families. Before the pandemic, she was a SAORI teaching artist at the hematology and oncology clinic at New York-Presbyterian Morgan Stanley Children’s Hospital.

Now that the pandemic has forced classes to take place via Zoom, Maurine and her colleague Jane Bloom employ SAORI-like circle weaving, most often using a paper plate loom and yarn to create distinctive patterns. “When we were on site, we would have a loom that is specially designed for the type of weaving that we do,” Maurine explained. “Using the paper looms has been really nice because participants have used them when we aren’t there. When we come with the floor loom they can only weave when we are there.”

A Refreshing Change of Pace

Rochelle Harden, Community Support Supervisor, was immediately interested when she was first pitched working with SANYC. “When they first introduced me to Maurine and Jane, I told them that had me at weaving,” Rochelle said. “When we started doing the zooms, when I was doing the weaving myself, I found it very relaxing. I saw our group would feel really good about it, too.”

Group members hold up their work at the end of the session.

Rochelle believes that the weaving sessions are a necessary change of pace from the group’s usually hectic daily schedules. “On Zoom, staff are sharing their screens, so they can be inundated with different topics, which is usually great and fun. But here you sit down, its’ one-on-one, it’s downtime and it’s a relaxing time. And I think that’s good. It’s also a creative process, and I think that’s where they get a kick out of it the most. ‘I did this, I created this.’”

Thursday weaving sessions are scheduled to continue through March, with plans in progress for extension. Maurine explained the beauty of SAORI: “Everybody weaves in their own way. It’s really terrific.” 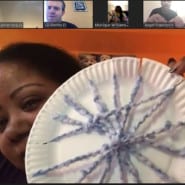 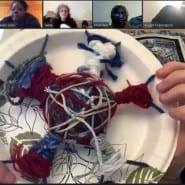 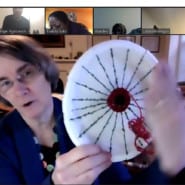 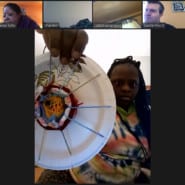 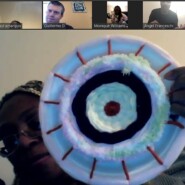