The ooey-gooey goodness of chicken parmesan is a staple of many kitchens. For the students of Staten Island, Employment and Business Service‘s cooking class, a simple baked version of the entrée with a side of whole wheat rotini pasta became the fifth meal they created together. As part an eight-week course, the chefs-in-training learn the skills and safety necessary to become more independent in the kitchen.

“This is a brand new project,” Gina Gioe, Program Supervisor at Staten Island EBS and the course’s instructor, said. “It’s something we’ve tried before but we could never find a place.” 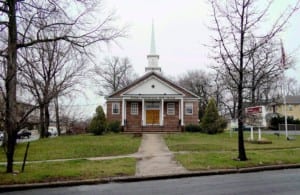 Thanks to a suggestion from AHRC New York City’s Associate Director of Residential Services, Michael Weinberg, the Bethel Evangelical Free Church, in Staten Island, was made available. Headed by Pastor Paul Robbins, the church has opened its doors for a number of free community endeavors. The cooking class is the church’s first collaboration with AHRC NYC, according to Trustee, Marty Manheimer.

The aspiring Barefoot Contessas, who took part in the class on a rainy Monday morning in March were Danny Lopez, Brian Bershad, Cateno O’Malley, and Oleksandra Okhotina.

The goal of the class is to teach cooking strategies and kitchen safety to increase independence in the homes of people with intellectual and developmental disabilities. The skills can be useful in the event a person wants to move out on their own or simply do more in their current living situation. 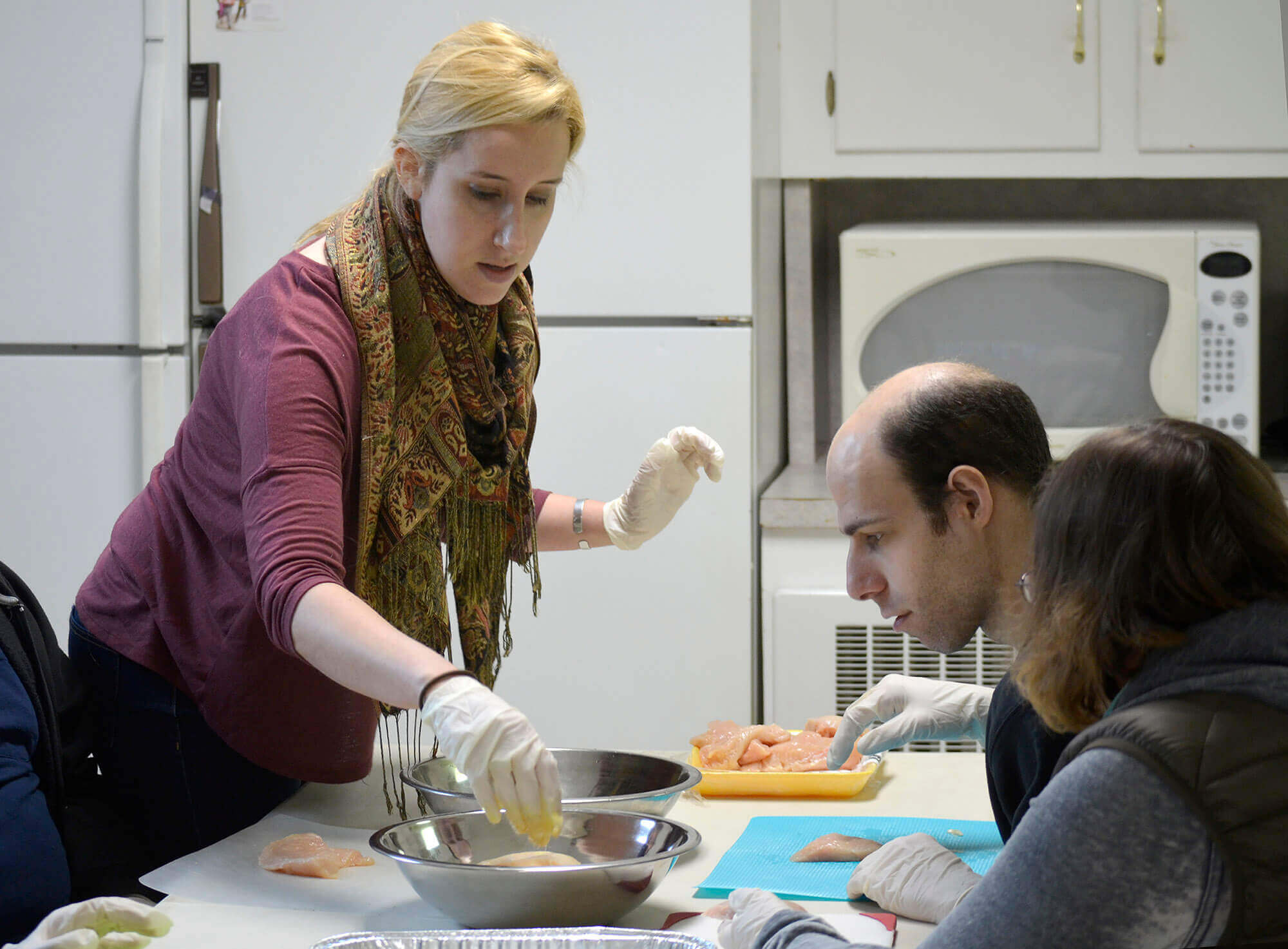 In addition to handling and preparing food, the class teaches things such as the importance of frequent hand-washing, the food pyramid, and the different types of kitchen tools and equipment.

Safety in the Kitchen 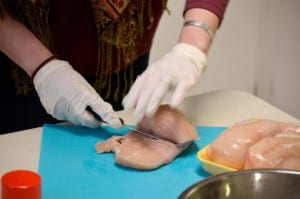 On March 28, 2016, the class learned about the dangers of cross-contamination prior to making a meal. The students each took turns reading aloud from a worksheet that explained why it’s important to use a cutting board, why you should wear gloves when handling raw meat, and ways to avoid spreading germs. Gina used the film, Monsters Inc. as a teaching example regarding cross-contamination. (In the movie the monsters have a meltdown when coming into physical contact with a human). 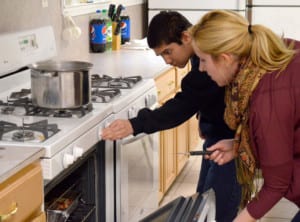 Danny and Gina turn on the oven

The team started by preheating the oven to 400 degrees, with Gina explaining that while it would taste better to fry the chicken first, it’s healthier to bake it. The group prepared the chicken by dipping it into beaten eggs, then coated it with Italian-seasoned breadcrumbs. After using nonstick cooking spray on a couple of baking dishes, they placed the chicken in the oven for 20 minutes.  Meanwhile, they boiled some water for the pasta.

Twenty minutes later the group poured tomato sauce over the chicken, topping it off with a generous layer of mozzarella. 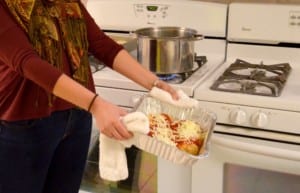 They returned their dish to the oven for 15 more minutes, checking on the meal from time to time, as Gina had instructed, since cooking times may vary from oven to oven. After cooking, they cut open each piece of chicken to ensure there was no pink meat in the center, making sure the food was fully-cooked. Each cook took turns stirring the pasta, which took 10 minutes to cook al dente. Then everyone dug in (and of course cleaned up afterward!)

“I’m very impressed with the whole thing,” Marty said. “I really like that they focus on nutrition and safety.”

The class will continue in their cooking lessons for a total of eight sessions.  Staten Island EBS is working to provide more opportunities to teach people who want to learn more about cooking in the weeks to come.