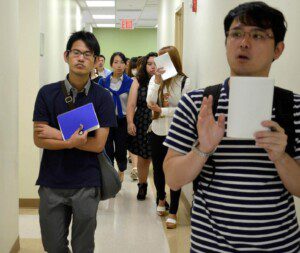 Harriet Simmons, a Community Support Professional, (CSP) at Howie Stone ADC, first explained that CSPs look to treat each person with dignity and respect while trying to help increase their independence.

“We teach people ‘ADL,’ All Day Living skills,” Catherine Bradley, also a CSP, said. “Which skills we teach depends on the person. I’ve been here for 13 years and we love what we do.” She also described community safety lessons, volunteer efforts with American Cancer Society, and holiday activities such as creating gift baskets for Mother’s Day.

At the adjacent Styler Center building, the visiting students were greeted by Community Support Supervisors, (CSS) Ranisha Jeffrey and Gail Rivera and Director, Doris Bernt. They spoke about a variety of programs and opportunities at the day program, including volunteering, a watching wrestling club, the Senior Lounge, and a game/exercise room with an Xbox, Wii, an electric rowing machine, and soon a stationary bicycle.

Down the hallway, approximately 65 people worked in Styler’s Pre-vocational center. There, Rochelle Harden, CSS, Styler Pre-Voc, and Awilda Aponte, CSS, Styler Pre-Voc and Transitions Without Walls, said that the goal of the program is to prepare people for paying jobs outside of the program, especially related to intricate manual work. The visiting students took copious notes as they traveled from room to room. 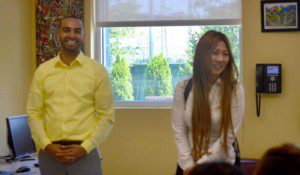 At Bronx TBI, CSS, Rolando Gonzalez explained that people who suffer traumatic brain injuries often have accompanying memory loss. Due to this, staff and people supported take pictures and make videos with their iPads, which are then compiled into year-end videos so that the memories can live on in digital form forever. Rolando played two videos for the group, one focusing on the 2014 holiday season and one focusing on friendship.

AHRC New York City thanks the students for visiting and Dr. Raymond Franzem, AHRC NYC’s Director of Internships, for organizing the day’s activities. 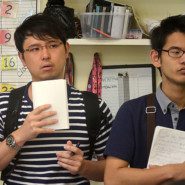 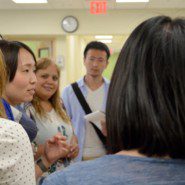 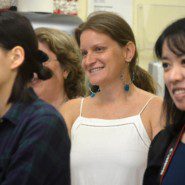 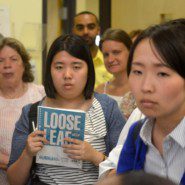