Luke Weber had an interesting piece of trivia to share. “My job is to stand in front of this Xerox machine and make sure I can scan all of the documents and manage all of the traffic because this is the only one,” he said. “You know, this is how the writer for The Usual Suspects came up with his movie idea.”

Like that film’s screenwriter Christopher McQuarrie, Luke works at a law firm, Brick and Patel LLP, during the day while working on “screenwriting, filmmaking, and the art of storytelling” in his free time. Along with his longtime colleague Joseph Lodispoto, Luke is thriving in a supported yet highly independent work environment.

Tsering Phuntsok is Joseph’s and Luke’s Job Coach. “Both of them have degrees from universities. They have in-depth knowledge about not only computer skills but about the workplace in general,” Tsering said. 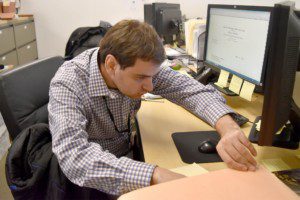 Joseph said that prior to working with Brick and Patel, Luke and he had worked in a Department of Justice office in Manhattan doing similar work. “We work well together. We have a lot of experience with each other,” Joseph said. The duo has a formula that supports each other’s strengths—Luke handles the scanning and digital processing of thousands of pages of documents while Joseph matches the scanned legal papers to their physical hard copies. In a spiral notebook to his left, he diligently takes notes to ensure each case file is accurate.

“Joe is a much, much better organizer than me, but he’s not the best at managing chaos,” Luke explained. “I am easier with that. I can move a little quicker than he can too.”

Bill Brick, one of the partners in the law firm, had been looking for a solution to his office’s paper problem for months. “We have about of 120 boxes of files that need to be scanned,” he explained. “We had been relying on college interns to do it and frankly they weren’t doing a good job.”

Bill found a solution to this issue when he reflected on the nature of the work that needed to be completed. “What kind of mind works well in this job? It requires some repetitive work but can be really focused and get this done,” he said. A quick Google search led to him to AHRC New York City’s Employment and Business Services, which supports a number of job-seekers such as Luke and Joseph who can thrive in such a position. 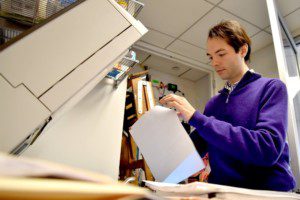 “They spent their first two weeks getting used to our system,” Bill said. “Now we have a goal of getting through two boxes per day. They are doing a great job so far.”

Luke knows why this job is working for him, as well. “It’s a separate side of the brain of what exhausts me,” he said. “It’s not physically demanding or emotionally stressful and there’s no time-sensitive burden hanging over me. I love problem-solving and learning how to organize things a bit better.”

Joseph was more direct when explaining why he feels he is succeeding at Brick and Patel. “I’ve done this work before. I guess I just like it because it’s a job.” 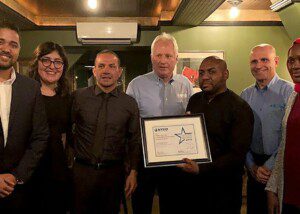 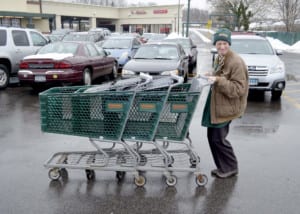 A Day on the Job with Richard Ward