On Wednesdays and Thursdays, staff from and people supported by programs at AHRC New York City’s Cyril Weinberg Day Services give back to their local Queens community by volunteering at a nearby food pantry. The pantry is run by Steinway Child and Family Services (SCSF), a Long Island City-based organization providing mental health and social services to children, adults, and families in the area. Their food pantry provided fresh produce, bread, and canned goods to thousands of people in need every year.

Assisted by Amina Ashraf, Community Support Professional, David Gaiptman, Rafael Kontizas, and Tracy Hewitt all took the Q train one stop to Queensboro Plaza and then walked to their destination to begin their volunteer work for the day. While the volunteers and the specific work they do vary from day to day, the general process does not. The volunteers’ job is to prepare bags containing foodstuffs to be distributed to members of the community on Fridays. The pantry runs like an assembly line, with each volunteer completing a task before passing their work on to the next person. 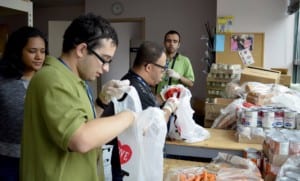 Volunteering at the local Food Pantry

On this particular day, David, Rafael, and Tracy prepared bags of fresh carrots and turnips for distribution; the day prior, a different group from Weinberg had prepared over 200 bags of food. Krish, a staff member at SCSF who helps coordinate the volunteers’ work, brought in several large bags of carrots that had been delivered earlier in the day. With turnips having previously been placed in big blue bags, the volunteers were required to sort the good carrots from the rotten ones (one bag actually came in mostly rotten, sadly), pick out eight-to-ten carrots of varying size, place them in the blue bag, and the neatly organize the bags into crates. Since David and Tracy enjoy activities involving counting, they decided to sort the carrots and Rafael handled bagging and organizing.

Ana Tejada, an Executive Associate at SCSF, said that their agency is grateful for the efforts of the Weinberg volunteers. “It’s very helpful because we don’t have any paid staff for the pantry,” she explained. “Maintenance helps but…it’s all volunteers. They follow instructions to a tee.”

Amina said that she has been coming to the pantry with people she supports for about a year and considers this volunteer site to be a resounding success. “It’s in our neighborhood, close to our program. It’s worked out so well for us.” She also stated how it felt to be involved with a project that makes a tangible difference locally. “It’s nice for me to work with them here because it’s meaningful work. And the guys love it; they always look forward to coming here.”

Staff and people supported by programs at Cyril Weinberg visit SCSF’s pantry twice a week to prepare food for the needy. Twice a month, the volunteers will go to the pantry on Fridays, where it is distributed to those in need from 10:00 am to 1:00 pm.