Without Walls and Super Saturdays Programs Collaborate for Musical Extravaganza 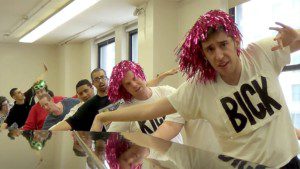 On Thursday, May 19, 2016, actors and staff from multiple AHRC New York City programs gathered at Pearl Studios in midtown Manhattan to execute a rousing final performance of their musical production titled, CinderElliot in Las Vegas. Billed as “an original fantasy murder mystery with music,” the musical was a modern and eclectic spin on the classic fairy tale Cinderella. AHRC NYC’s Day Hab Without Walls  (DHWOW, operated by our Day Services department,) and Super Saturdays, (a recreation program operated by our Camping and Recreational services department,) took part in the creation and presentation of this fantastically fun staging. 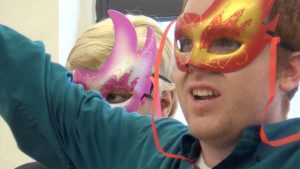 “At Super Saturdays, we did a female version of Cinderella,” explained Christina Conroy, Art Consultant, as she welcomed the audience. “But we have a lot more men than ladies here so we created a male version and called it CinderElliot.” Christina added that the plot, setting, and dialogue used in the musical were the result of a series of meetings between the actors over many months.  The group collaborated, and then Christina created a script and musical numbers based on their ideas. “I think this is an amazing piece of theater you’re about to see,” she told a packed house just before the performance began.

Set during Mardi Gras in New Orleans, CinderElliot begins with Elliot, the son of an aspiring dentist mother and a professional gambler father. Elliot’s father’s past catches up to him when he is shockingly murdered by an unseen assailant. Elliot and his mother return to their Las Vegas home to piece their lives together and they are soon visited by New Orleans Detective, Max Miller, and his triplet sons, under the auspices of being helpful friends. 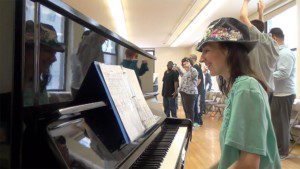 Musician, Tara Fialco accompanied the actors with the piano.

After Elliot’s mother leaves Las Vegas to attend the University of Michigan for dental school, Max and his kids become very cruel to Elliot, forcing him into the titular role of house cleaner and servant, while they enjoy the high life in Sin City. Max soon admits to Elliot that he was the one who murdered Elliot’s dad for unpaid gambling debts. Further hijinks take the play to an America’s Got Talent audition where Elliot breaks free, with help from his fairy godmother, giving the performance of his life. Max is eventually arrested and as with any good fairy tale, Elliot and his mother live happily ever after.

At the conclusion of the play, the actors received a thunderous ovation from the audience and bouquets of roses from Kemeisha Thomas, Community Support Supervisor, DHWOW. On this day, the clock never struck midnight on an uplifting musical. AHRC NYC applauds the actors for their creativity, both in crafting the musical and in performing it for audiences. 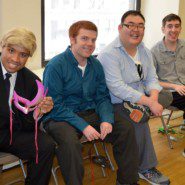 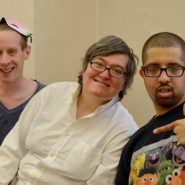 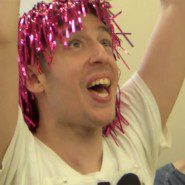 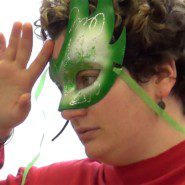 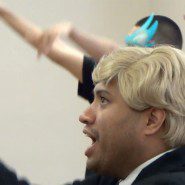 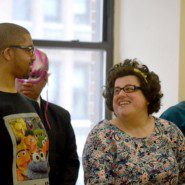 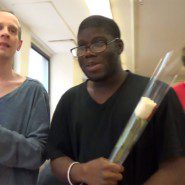 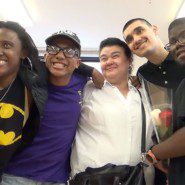