The people at the Self-Advocacy Association of New York State (SANYS) have a message for you: “Get to Know Me First, Not My Disability!” That was the theme of the 2019 SANYS New York City-Westchester Regional Conference, held on Thursday, June 27 at Hunter College’s Silberman School of Social Work. The day featured speeches from self-advocates and professionals in the I/DD field, workshops geared towards informing self-advocates on a wide variety of topics relevant to their daily lives and services, Board of Directors elections, and some karaoke to finish off the event. 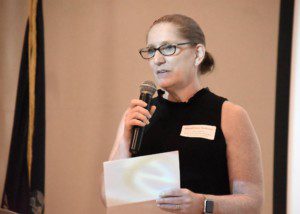 The day began with an introduction from Masters of Ceremony, Cassie Rafucci, and Kristen Thatcher. They welcomed MaryGrace Giuliano, OPWDD Director for DDRO Region 4.

“I can speak about self-advocacy, but you guys speak about it so much better than I can,” MaryGrace said, instead choosing to read from a passage written by a self-advocate living and working in the United Kingdom. “She [the self-advocate] wrote ‘Having your own voice is essential to not only asserting yourself but exploring yourself.’ Thank you for sharing your knowledge of advocacy to individuals like myself and for being a voice for those that still have not found their own.”

Self-advocates had the choice to attend workshops of their choosing, held in back-to-back sessions after the introductions. In the opening session, topics included supported decision making, self-direction, transportation and accessibility, a panel on Care Coordination, and housing/independent living, which was presented by Jennifer Teich, AHRC NYC’s Director of Individualized Supports, and self-advocate Janice Bartley.

In the second set of workshops, issues such as Medicaid, connected with elected officials, employment, and the #BFair2Direct Care initiative. LGBTQ Ally training was hosted by Michael Carbonaro, a recent graduate of the Melissa Riggio Higher Education Program at the College of Staten Island.

Laughs, gasps, nods of approval, and finally a rousing ovation greeted Janice Bartley as she delivered the keynote address to the conference. Jennifer Teich read some passages aloud to assist Janice.

“Take charge of your life and go after the desires of your life,” Janice began. “Look at me, not my disability.”

Janice’s family found out about her disability shortly after she was born. “I was diagnosed with cerebral palsy at three months of age. Doctors told my mother that I wouldn’t live long and that I wouldn’t be able to eat, think, or take care of myself. That doctor was the first person I proved wrong. I wish he could see me now. Janice Denise Bartley is 50 years old and living her best life.”

Janice now works for AHRC NYC’s Individualized Supports department, lives in her own supportive apartment, and recently got engaged. She now likes to use her voice to advocate for her rights and the rights of others with disabilities who can’t speak for themselves. “I want to be seen as a bright, intelligent, and, of course, a sexy woman. I used to think having a developmental disability would be a life sentence. I now know we all have the right to have a meaningful life.”