Comfort Madison admitted that the subways and buses were not her strong suit. “Until I began independent travel, I didn’t know much about traveling,” she said. “I would just go from home to the program. I really didn’t get to travel that much.” Now thanks to the support of the independent travel instruction program at Church Avenue Day Services, and offered throughout AHRC New York City’s Day Services, (ADS) Comfort is an independent traveler. “The trainers have made a big impact on my life,” Comfort said.

Comfort and other independent and supported travelers joined together with ADS staff members to thank staff for supporting independent travel with an appreciation event on Monday, November 19, 2018. Guests were provided with pizza, cookies, and other refreshments. They captured photos in a transit-themed photo booth and received goodie bags at the end of the event. Each staff supporting independent travel also received a certificate of appreciation signed by AHRC NYC’s Marco Damiani, CEO; Harriet Golden, VP of Programs & Service Innovation; and Christine Demel, Independent Travel Coordinator.

Darinka Vlahek, Director of Curriculum Development, began the event by tracing back the history of the independent travel program. “In 2000, we were asked to create a curriculum for independent travel, and we had just one person who was an instructor; his name was Justin Russo,” Darinka recalled. “Since 2000 until today, we have about 200 staff members supporting independent travel. We hear so many stories from people who become independent. What you all do is absolutely amazing.”

Ronald Boalds was the first person to receive independent travel instruction, working closely with Justin Russo. “The reason I learned to how to travel is that I was a messenger, going from the main office to Far Rockaway,” said Ronald. “Now I visit my grandmother and take the city bus to visit my mom in Brooklyn. If not for Justin and other staff, I wouldn’t be here today.”

Seth Krakauer, Employee Development Manager, and Betsy Lynam, Executive Vice President and Chief Program Officer, noted the growth and success of the independent travel program as one of AHRC NYC’s finest accomplishments. “There is no other agency that does this service like you do,” Betsy said.

Six staff supporting independent travel received special recognition from Christine Demel for their longtime success in the program. The six trainers were:

Michelle Grice has been supporting people to become independent travelers for a little over two years. She said of her experience with the program that “It’s been wonderful. It’s amazing when you can do your work and see something being accomplished. The young man that I’ve supported to travel independently is outgoing, working to this day, and proud of what he has done.” 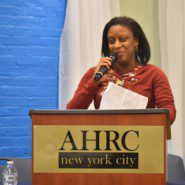 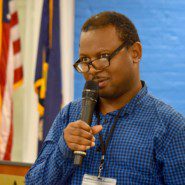 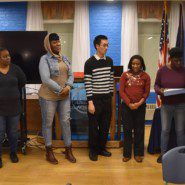 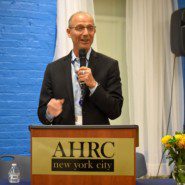 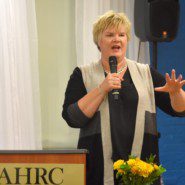 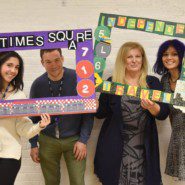 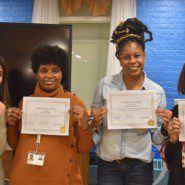 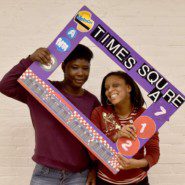 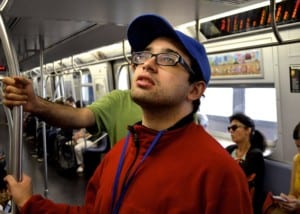