Staff members and people supported by AHRC New York City programs participated in our fourth annual Martin Luther King Day of Service on Monday, January 17. Volunteers braved the elements and continued to engage in COVID-safety protocols, such as mask-wearing and frequent sanitization, as they supported community partners in combatting food insecurity in Manhattan and Queens.

The MLK Day of Service is just the beginning of AHRC New York City’s year-round efforts to alleviate food insecurity in all five boroughs through volunteering and community partnerships. People supported by AHRC NYC programs and staff members engage in a variety of acts of service to improve their neighborhoods, appreciate the value of helping others, and provide visibility of social justice issues to members of the public.

AHRC NYC’s Norfolk Day Services served as one hub for the initiative. Other programs joining included AHRC Fisher Day Services in Harlem and Joseph T. Weingold Day Services in Elmhurst. At Norfolk on Manhattan’s Lower East Side, food collected from a community food drive, done in partnership with Essex Market, was donated to Bowery Mission, along with handmade scarves and hats. 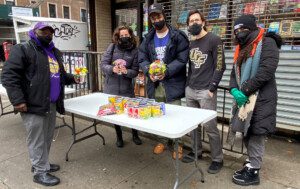 In Washington Heights, staff members and volunteers established a donation hub at Word Up Community Bookstore. The shop’s Amsterdam Avenue storefront had tables set up with non-perishable food items, donated coats and jackets, and personal protective equipment, all free and available to anyone passing by on the street who needed them.

AHRC NYC and Word Up also worked with the National Black Leadership Commission on Health to set up a pop-up clinic that provided COVID-19 testing, vaccinations, and other medical needs to a community that does not typically experience health equity.

Inside the store, Citymeals on Wheels representatives provided volunteers with shelf-stable food to deliver to homebound seniors living nearby. Citymeals and AHRC NYC have partnered together for more than a decade.

“AHRC NYC has been a long-standing community partner delivering food pantry packages, making cards for seniors receiving the meals, and just helping generally with our delivery partnerships,” said Vik Bensen, CityMeals on Wheels’ Senior Associate for Programs and Aging Initiatives. Vik and a colleague, Cesar Perez, gave volunteers instructions on how to deliver the food to the local seniors, encouraging them to call if necessary to ensure that the meals reached their destination. 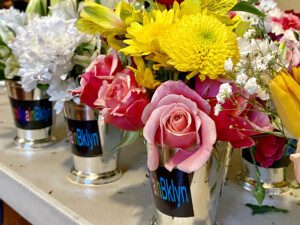 BloomAgainBklyn provided beautiful flowers that were delivered to homebound seniors along with nonperishable food.

“We’re always more than happy to provide bags if there are people to deliver food to seniors in the neighborhood. There’s always a need for them here in Washington Heights,” Vik said.

Accompanying each CityMeals delivery were small bouquets created by BloomAgainBklyn, a community-based, non-profit organization that repurposes unsold and once-used flowers into new arrangements which are distributed by volunteers to home-bound seniors, local nursing home residents, trauma and homeless survivors, and others in need.

Makai Frazier, a Community Support Supervisor at AHRC Fisher Day Services in Harlem, volunteered at Word Up when he was a college student. He helped to organize the MLK Day initiative there.

“This all came together really fast, but I was very excited to see an event like this in the neighborhood I grew up in,” Makai said.

Stephen Cohen delivered meals to homebound seniors in Elmhurst, not far from where he receives support at Joseph T. Weingold Adult Day Services. He expressed a sense of personal fulfillment upon completing his route and helping a home-bound senior.

“That man was smiling when I gave him the food and flowers,” Stephen said. “He was happy. I did a good thing.”

Makai is eager to get back to work with Word Up! And AHRC NYC to improve Washington Heights and NYC at large. “We look forward to what’s to come with our connection with Word Up Community Bookshop,” he explained. “There has already been talk of an ongoing donation of sandwiches to the community fridge that Word Up has, and I’m in the process of setting up a show where our artists from Fisher can be featured. We’re dedicated to bringing something positive out of the challenging year that we’ve all had.” 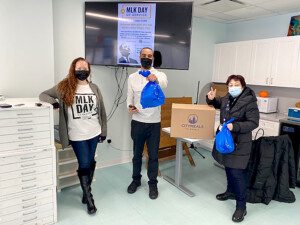 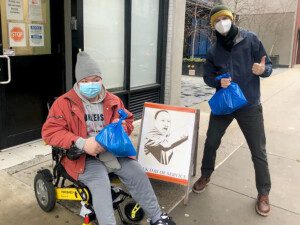 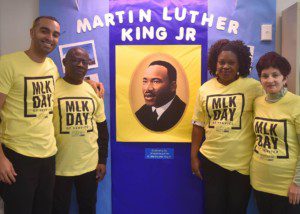 AHRC New York City Gives Back During the… 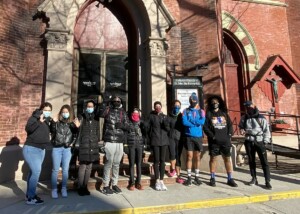 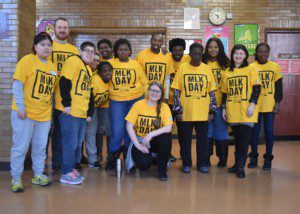