Less than a month after AHRC New York City participated in its first LGBTQ Pride Parade, the agency joined forces with dozens of other disability groups to mark the fourth annual Disability Pride Parade. Held on Sunday, July 15, 2018, this year’s march reversed the route from previous years, starting around Madison Square Park and heading down Broadway before terminating at Union Square Park. A festival complete with live music and vendor stations greeted marchers at the end of the parade.

Organizers said the theme of this year’s parade was creativity. AHRC NYC’s group took this to heart as they brought colorful signs and banners to display. Many marchers wore a blue shirt with white lettering reading “See the Able, Not the Label” designed by self-advocate Christina Velonis.

Reactions from People at the Parade

Michael Carbonaro was attending his first Disability Pride Parade. “I thought it would be a good opportunity for us to come together,” Michael said. “And I’m really glad to represent the College of Staten Island’s Melissa Riggio program today. I’m a senior and graduating there next year.”

While Michael and some of his peers were joining AHRC NYC at the parade for the first time, others were thrilled to make their returns. “I’ve been at every one since the beginning,” Toni Agovino, AHRC NYC Board Member, said. “I’m proud to walk in honor of my sister Elena. I do this for her.”

Djuana Richards is a Community Support Professional at Manhattan Day Habilitation (Hudson St.) and came with self-advocate Ernestine Rivers. “I’ve been at this since it started. I love being out advocating with [the people we support], making sure they have a voice to be heard,” Djuana said.

“This is my fourth year, I never miss it,” said Yuliya Khripunkova, Program Director at Employment and Business Services – Brooklyn. “I’ve been with the agency for 15 years and we waited to come together as a community for a long time. It’s great for families and those who get services. We’ll raise awareness and use it as a chance to advocate. We always talked about why people with disabilities didn’t have a day to come together as one and now we have it.” 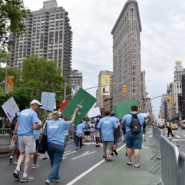 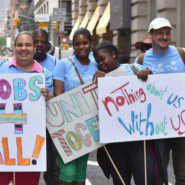 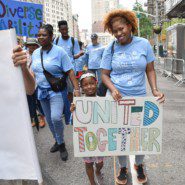 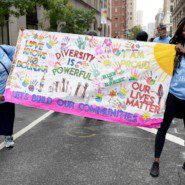