Advocates from AHRC New York City and many other partners in the quest for social justice and equality for people with disabilities came together for a virtual version of the 2022 Disability Pride Parade. The in-person parade, also scheduled for Sunday, October 2, was canceled due to inclement weather that included dangerously high winds. Nonetheless, the virtual parade brought people with disabilities, professionals, family members, and members of the public together to celebrate perseverance and unity.

“The theme of today’s event is Nothing About Us Without Us,” said Christina Curry, Commissioner of the Mayor’s Office for People with Disabilities. “Even when we disagree or are faced with challenges, it’s important that we come together for a day like today.”

The virtual event began with beautiful folk song renditions presented by Josh Friedman, a guitarist with visual impairments. Elisabeth Axel, the founder of Art Beyond Sight and one of the main organizers of the event, expressed empathy for the many performers who were unable to showcase their talents in person.

“We’re saluting, in particular, our artists, musicians, and dancers who create,” Elisabeth said. “We are so sad not to be able to view your artistry. Let’s try not to think about what was canceled; let’s just be together in this moment.”

Some advocates implored attendees to continue being active in the quest for disability justice.

“Not all disabilities are visible,” said California-based singed Jennifer Kumiyama. “We need to continue showing our voting power. We are demanding equitable access to basic needs—housing, employment, education. We exist in every type of community, and we must keep paving the way for the people behind us, just like the people before us did.”

Former NYC Council Member Helen Rosenthal reflected on the personal advocacy she’s heard from disability advocates throughout her long career. She cited efforts to improve accessibility at community meetings and a law requiring candidates applying for public matching campaign funds to physically describe themselves to assist voters with vision challenges.

Matthew Estep, AHRC New York City’s Self-Advocacy Advisor, introduced longtime advocate Bernard Carabello. Matt explained how Bernard worked with Dr. Michael Wilkins, Geraldo Rivera, and others to expose Willowbrook as “an Institute synonymous with neglect and deplorable conditions We are proud to honor Bernard this year on the 50th anniversary of the expose and the 35th anniversary of the closing of Willowbrook.” Bernard was commended by all in attendance for his perseverance and unwavering good spirits.

“It’s so great to be in my own apartment after 18 years in Willowbrook,” Bernard reflected. “I know I’ve dealt with a lot in those years. I want to thank all of you for making me a Grand Marshall today.”

All efforts will be made to safely host an in-person parade in 2023. 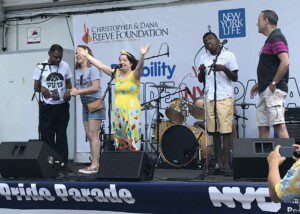 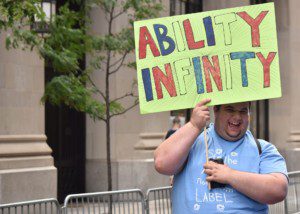 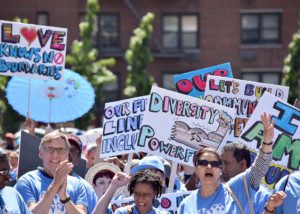