Some traditions cannot be delayed. AHRC New York City’s 71st Annual Meeting was conducted via Zoom on Thursday, September 25, 2020, allowing more stakeholders than ever to join and reflect on a year like no other.

“This last year was fraught with unimaginable challenges,” with the COVID-19 pandemic at the forefront, said Sharyn Van Reepinghen, President of the AHRC NYC Board of Directors. “Our community was hard hit by the illness. It affected our lives in so many ways. It is actually hard to believe that we will ever be able to go back to living how we lived before COVID.

“But on a very bright note, I want to acknowledge the courageous front line AHRC NYC staff who worked tirelessly, and effectively to keep the people we serve safe. You are our heroes.”

Marco Damiani, CEO of AHRC NYC, followed Sharyn with a presentation outlining a vision for the organization “grounded in innovation, communication, and how we align our work together for a better tomorrow.” Marco said the pandemic has created extraordinary stressors for all stakeholders, including financially, and produced an enormous workload for AHRC NYC staff members, whom Marco described as “our most valuable asset.”

“Much of the work we’re doing now is virtual,” Marco said, including a wide variety of programs for people receiving support. “We are using technology to communicate on an everyday basis with our staff, in our leadership meetings, and with our stakeholders throughout the state and the country.”

Marco announced a branding initiative that will refresh our image for a new generation and shared AHRC NYC’s strategic plan that will focus on data-informed decision making, service innovation, and being a leading advocate for social justice. He said that the pandemic has “laid bare so many of the problems in our society,” especially racial inequities. AHRC NYC has engaged with Professor Tawara Goode from Georgetown University’s National Center for Cultural Competence and engaged in listening sessions with its staff members of color to hear their firsthand experiences with racism. “We need to listen, pay attention, and determine collectively what are the next steps to give Black and Brown people an absolutely solid opportunity to grow with us,” Marco said.

Marco closed by again commending AHRC NYC’s amazing workforce. “This is an amazing staff that rises to the occasion. They flex when they need to, they support people creatively, they exceed expectations, and they never stopped. We are a national model for working together in a crisis, and I’m very proud to call all of them a colleague.”

Two videos were screened at the 71st Annual Meeting. People that AHRC NYC tragically lost from COVID-19 were memorialized in a short film created by Scott Dodson, Communications and Website Manager. Then, a film celebrating AHRC NYC’s frontline direct care workers was shown, containing interviews with DSPs and messages of thanks from AHRC NYC management. Joseph Mercedes, a Community Support Professional at Howie Stone Adult Day Center who has worked at Greenberg residence in the Bronx during the pandemic, was featured in the video and spoke further about his experiences afterward.

AHRC NYC’s new Board members, officers, and Board Nominating Committee were installed by Assemblymember Karines Reyes, a registered nurse who is representing the 87th District in the Bronx. She affirmed her support for AHRC NYC’s mission, stating “One of the reasons I wanted to become a legislator coming from a healthcare background was because I believe we need representation in all levels of government that is empathetic and affirming of all people,” Assemblymember Reyes said. “I think in order to make true, impactful change in the I/DD community, we need individuals who understand their plight, their challenges, and the challenges of the caregivers and the organizations like  AHRC NYC that provide services to the I/DD community.” 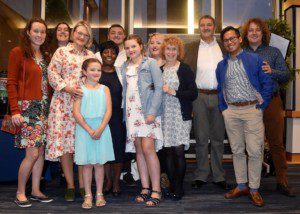 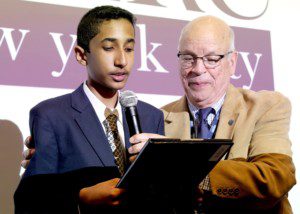 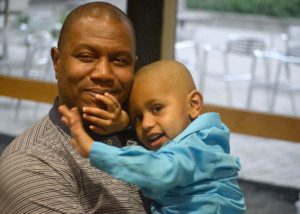 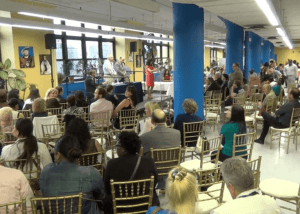 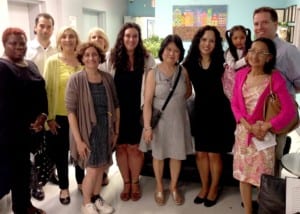 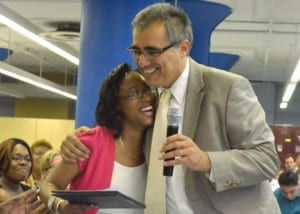