Valentina Shmulenson, Facility Director at Stephen B. Siegel Center, said that staff members watch videos two or three times per week in the morning prior to when people receiving services arrive for the day’s activities.

“It can be a very simple topic,” Valentina explained. “The videos are maybe four or five minutes. We invite people to participate in the discussion, and supervisors back them up. There is no right or wrong, it is a discussion.” 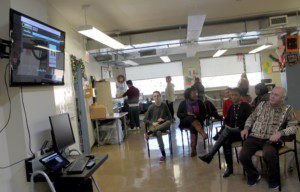 Community Support Supervisor, Marie Delsoin often leads the discussions. “Most of the videos that we see are educational to help the staff better help the people supported,” Marie said. “We discuss it and find ways to implement it into our program.”

The videos often focus on difficult yet important aspects of the direct support relationship between staff members and the people they support and offer strategies for improving that relationship. Some video topics that staff members at Stephen B. Siegel Center said that they have enjoyed the most include “We Are Not Friends, We Are Not Family,” “Staff Have Traumas Too,” and “All Behavior is Meaningful.”

“We pick a video and a staff member leads the discussion,” Ashley Lawhorn, Community Support Professional, said. “Sometimes it goes off-topic, but that’s good—it’s the conversations that are important. Some things don’t pertain to us, but others we have implemented here.”

Side By Side Learning Model

Andy said the scope of the OFL pilot program quickly expanded. “What was initially supposed to be a brief trial for some online courses has turned into a great tool for staff engagement and shared learning,” he said. “Direct support staff at Stephen B. Siegel Center have paired with people they support to take ‘Side-by-Side’ learning modules where staff learn together with the person they’re supporting on various topics from advocacy to rights to community engagement.”

Community Support Professional, Angela Bagriy was one of the first to try out the Side-by-Side learning model. “We basically went to one of the people we support’s community to get a feel of how she’s accepted and what she likes to do,” Angela said. The person she accompanied was Suada Shamkalova. “It was a preview of Suada’s community and her everyday life,” Angela said, adding that it was an educational experience for her and allowed her to better understand Suada and other people she supports. “She’s aware of a lot of places,” Angela said. “We bumped into a couple of people that knew her. We had a good time! We ended up at Dunkin’ for breakfast, went shopping, and to a local park.”

Andy has been encouraged by how OFL has been implemented at Stephen B. Siegel Day Services. “These morning sessions have helped to promote dialogue and support staff to reflect on the work they’re doing in a different way,” he said.