The programs offered by AHRC New York City’s Day Services centers provide those who participate with neighborhood connections that promote community inclusion. In some cases, the community partnerships that yield these results are born through volunteerism.  The opportunity to contribute to others in the community can be extremely significant, as those who participate gain new skills and participate in new experiences.  Being productive makes one a valued member of society, and the positive effects can be seen not only in their demeanor but sometimes in the work that they create.

From Volunteering to Exhibition

According to Jason Schneider, Program Supervisor, Cyril Weinberg Day Services, each week, a group of people who are supported through the center volunteer at two local libraries in the community of Astoria, Queens, helping with tasks including the sorting and shelving of books, compact discs, and magazines.  On the first and third Monday of each month, the group hosts public art workshops at one of the libraries and invites the local community to join them as they introduce attendees to new art media and techniques.  Their knowledge of artistic techniques comes from practice, and these artists were recently invited to show their artwork in their second art exhibit at the Long Island City Library which runs from December 10, 2012 through January 30, 2013.  On Friday, December 14, 2012 the artists of Cyril Weinberg hosted an opening reception at the library, where some of the artists discussed their work.

Attention to the Details 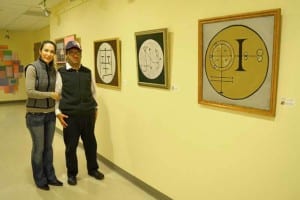 As an Art Counselor, Judy Tanibajeva supports the artists of Cyril Weinberg as they experiment with materials and make decisions about the artwork that they create.  An artist herself, Judy often encourages artists to find new ways to express themselves visually, identifying their strengths, and supporting them as they conceive and generate new work.  Judy supports Tenzin Tsethar, one of the artists participating in the exhibition.  “Tenzin’s earlier artwork was made with markers.  The pieces turned out very nice, and I noticed that Tenzin’s work showed great attention to detail and precision,” said Judy.  “I encouraged him to start working with acrylic paint, and he enjoys it.”

“I think about it before I start,” said Tenzin, who plans each of his paintings before diving into production.  For Tenzin, the process of creation is important, and the opportunity to work along with his friends makes him happy.  Tenzin also enjoys singing and dancing at Cyril Weinberg. 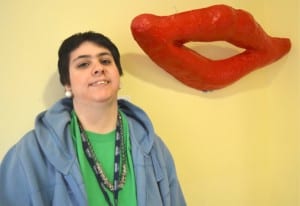 “I did a sculpture.  I used newspaper and I painted,” said Lauraine Leahy, who collaborated with Kenneth Sher and Yvonne Raby to create a paper mache project entitled, Smile. 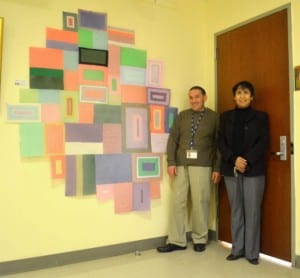 Khin Khin Htwe is a Community Support Professional at Cyril Weinberg, and also participates in the Everyday Heroes initiative, which recognizes the contributions that Direct Support Professionals make in the lives of people each day, through their endless commitment to those who they support.  The initiative emphasizes human connections and skill-building, and the people who participate experience growth as they move toward their goals.  Khin Khin partners with Michael Vias through the initiative, and in Michael’s case, a lot of their work surrounds his dedication to making art.

Michael is proud to exhibit his newest series, Modern Fantasy, which contains two meticulously woven pieces, each of which required more than a year to complete. 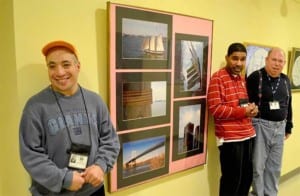 Kenneth Sher, Barry Wood, Michael Steward, and Anthony Scipone contributed their photography to the exhibit.  In contrast to the artwork created within the day center, photography enables these artists to enjoy trips into the community, and to capture images of the world around them.

AHRC New York City thanks Jason Schneider, Judy Tanibajeva, Khin Khin Htwe, and Community Support Professional, Kasia Mysliwiec for their work to foster the creative work of the people who they support, and for their efforts to partner with the Long Island City Library to exhibit their creations.  In addition to the artists named in this article, the current exhibition includes work from Sharon Jackson and St. Clair Comas.  The exhibit will be on display on the library’s second floor, through the end of January 2013.