It’s the classic first-day-of-school essay assignment: “What did you do over the summer?”

On Friday, September 8, 2017, untold numbers of students in New York City and beyond were answering this question on a sliding scale of enthusiasm. But for the Augmented and Alternative Communication (AAC) group at AHRC New York City’s Betty Pendler Day Services, it’s a gateway to expressing themselves using technology and peer support.

“The best thing I did this summer was going to Washington D.C. with my mom,” Awad Awadallah says, using his NovaChat device. “I also went with my staff to see music in the park.”

The group meets monthly at the League. Lorraine Cohen, M.S., CCC-SLP, Assistive Technology Specialist, helps guide the members from topic to topic, offering suggestions on how best to use their devices and on what to prepare for in future meetings. 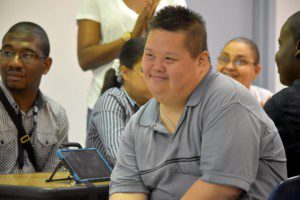 Danny Wong smiles as his peers celebrate his birthday

“Before we start answering today’s question,” Lorraine began, “we have to mention that today is an important day. …It’s Danny Wong’s birthday!” Danny, who was sitting in the front of the room, was surprised and enthralled as his friends began saying “Happy Birthday” to him, some with their voices and others using their devices.

“I would love to get a new tablet case for my birthday,” Danny said with his device. “I hope my family takes me out to dinner.”

“What’s your favorite food to eat on your birthday?” Lorraine asked.

“Orange chicken and rice, and shrimp and broccoli,” Danny responded.

Founded in 2014, the ACC group is an interdependent mix of communication abilities. Some group members can speak without any use of a device, while others require technology to assist with communication. Lorraine said that 90% of people who attend the meetings and use devices use or own durable medical equipment; devices that were funded through Medicaid become their personal property. 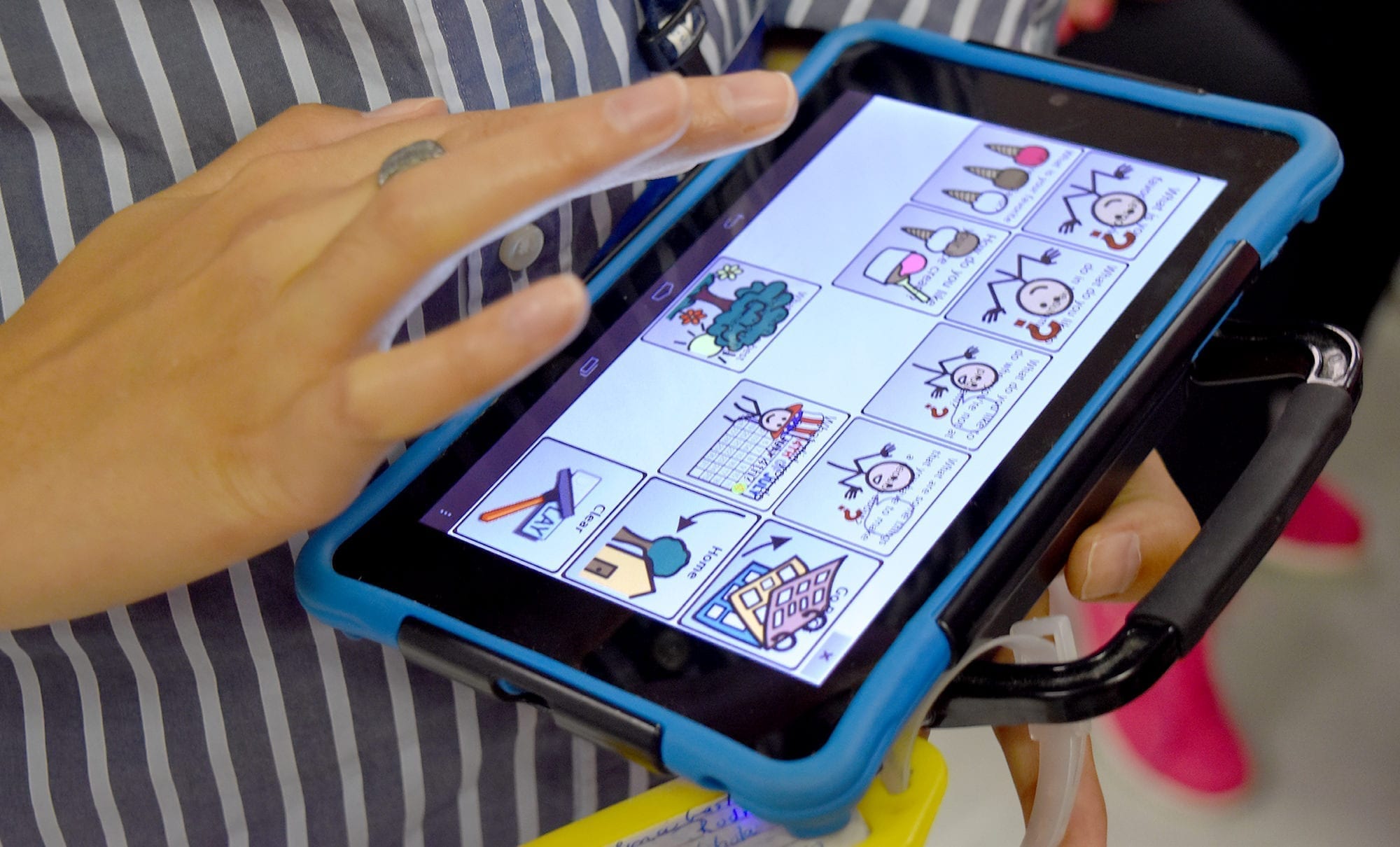 “Nobody likes to be the only person at a site who uses a device,” Loraine said of the benefits of a peer-supported approach. “Peers should be friends who are interested in technology and their role is to help the person who uses the device to find what they want to say if they need help, and to act as a communication ‘aide,’ so to speak.

The devices allow the user some customization options. Jamel Mills, for example, likes to change the voice of his Saltillo device, some days programming it to speak words using the standard robotic-sounding speech, and on other days Jamel programs the device to speak words using a Caribbean island-influenced accent.

The group continued their meeting with others describing their summer adventures. Ivelisse Cruz said she used a hot tub for the first time. Jamel said he recently had the opportunity to dance with a Broadway actor, in preparation for an upcoming performance. Michael Burcea detailed his trips to Connecticut and Maine. Danny went on a cruise to Bermuda with family members and showed some pictures he had uploaded onto his device. 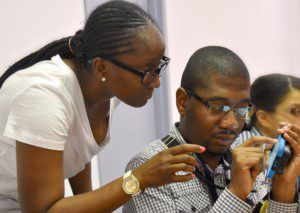 Community Support Professional, Djaka Conde and Awad Awadallah practice the use of his AAC device

Community Support Professional, Djaka Conde, says that she has been working with the communications group for over a year. “My background is in technology and communications, so it was crazy to see that [people receiving AHRC NYC’s services] use them as much as they do,” Djaka said. “Every week, my group has our own little meeting about our devices, and twice per month we upgrade the device software.”

Djaka explains that she has seen improvements in behavior and social interaction as more people have become acclimated to technology. “It has changed them so much,” she says with a smile. “At volunteer sites and restaurants they can say what jobs they want to do or what they want to eat. With the devices, they make their own choices.” 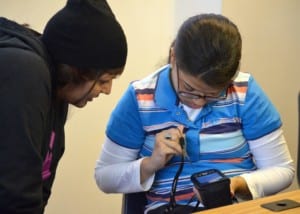 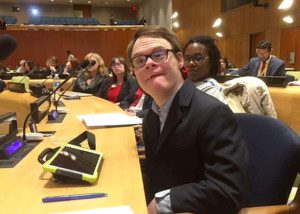