“This really started with my son, Alex who has special needs and is going to the Melissa Riggio program at Hostos,” said George Patsalos, the owner and operator of BCCO NYC. George’s sons Yani and Dmitri are also integral members of the business. “It has morphed from AHRC helping us to how we could help AHRC.”

BCCO NYC began training people at their headquarters in the Ed Sullivan Building in midtown and even hired two people, James Pardo and Pascual Santiago after they excelled in the program. Their success got the Patsalos family thinking. 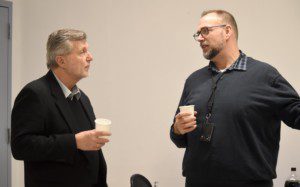 “We started with hiring workers from AHRC and from that we thought ‘Wouldn’t it be great if, instead of us training them, why don’t we start a training program [at New York League] so that they can come to us?” George said.

That training program, which is administered by Lucas Hanson, Director of Day Service’s SEMP program, and Peter Doherty, Employment Skills Coordinator, has been mutually beneficial. People in the program are learning transferable job skills, important financial tips, and working in a professional yet social environment. For their part, BCCO NYC is gaining employees that already know how their business operates. Matthew Weiler, Director of Operations and Community Engagement for Day Services, said that BCCO NYC has now hired seven people receiving support from AHRC NYC.

“An Exciting Place to Work“

George said that the partnership has simply begun requiring more space to operate. “We were having difficulty placing all of the staff,” he explained. “This is a really great start. We hope we can expand this part of the business so that we can hire more people from AHRC.” 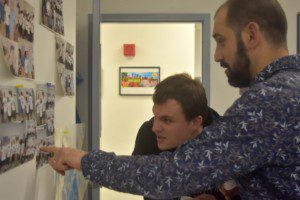 George described the NYL site as “a microcosm of what we do on Broadway. There is a heat press and a shirt press. We print transfers onto shirts. We hope to be able to do other forms of printing here in the future.”

Eamon O’Tuama, Director of Betty Pendler Day Services Program C, said that BCCO NYC has been a welcome addition to the program. “So far it’s been seamless,” he said of the expansion. “We’ve always been used to having visitors. They are slowly building up to doing more productions, as the training facility here for some time now. It has not been a burden. It’s an exciting place to work.”

For BCCO NYC and the Patsalos family, the continuing partnership with AHRC NYC is the culmination of their goal to help out young people with disabilities who are looking to enter the workforce. “It’s important for us to give back,” George said. “This partnership enables us to bring in trained workers. Many of the people are really great employees. As long as we can tailor the work to their particular assets, it works.”