A decade ago, the dream of a young girl gone too soon began to be realized. Since 2008 the Melissa Riggio Higher Education Program (MRHEP) has afforded dozens of young people with disabilities the opportunity to experience college life, attend classes of their choosing, and receive critical job skills through internships and mentorships. The 10-year anniversary of the program and the latest crop of graduates from MRHEP at the College of Staten Island were celebrated on Tuesday, May 29th.

Celebrating the Past and Present

MRHEP’s namesake, Melissa Riggio, dreamed of going to college but could not make that a reality in her lifetime. Her parents, Steve and Laura Riggio, saw their daughter’s idea through and worked with AHRC New York City to create the program. (Steve is a former AHRC NYC Board Member and is currently the Secretary/Treasurer of the AHRC NYC Foundation Board of Directors.) It began with a partnership at CSI and over the past 10 years has expanded to three additional CUNY schools. 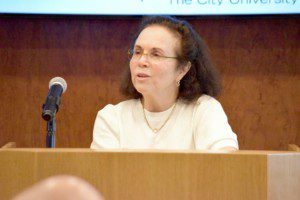 “The MRHEP was there at the beginning of a movement that demands that society see people with disabilities in a different way,” Carole Gothlef, Director of Individualized Supports, said. She explained that she was hired 12 years ago by then-Executive Director Michael Goldfarb “to open up the doors of higher education for students [with disabilities]. We have to dream radical ideas and listen to each other; partner with others, especially our families, with organizations, with government, and we have to make some thunder and speak up for our rights.”

CSI President, William J. Fritz said that he has only been at the college for a few years but is consistently impressed and inspired by the Riggio Program. He continued a personal tradition by reading the lyrics of a song Melissa Riggio wrote, “Love is a Potion.”

The five graduating students this year—Sarah Kahn, Alissa Lontoc, Will Peters, Robert Kranpost, and John Lipari—made presentations on their senior projects and spoke about how their mentors in the college program helped make for a great experience. “I was nervous and really shy when I started the program,” Alissa said. “Now I look forward to starting new adventures with new goals.”

Read and Watch NY1’s Coverage of the Graduation

Congratulations to these and all of the graduates from this year’s Melissa Riggio Higher Education Programs across the city! NY1 sent a reporter to cover the event. To read the article and watch a video, click here.

To read an article about the graduating class of MRHEP’s Kingsborough Community College program in Brooklyn, click here. 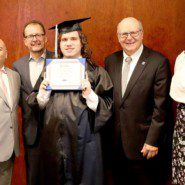 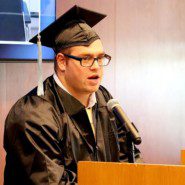 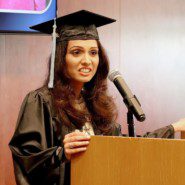 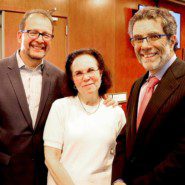