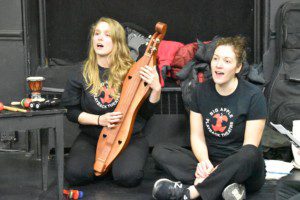 Playback Theater incorporates music, dance, and improvisation into its performances.

On November 19th, 2019, people from AHRC NYC’s Dorothy and Michael Styler Day Services held an intimate theater performance for family and friends at the Bronx Academy of Art and Dance (BAAD!).  This production was the result of a three-way community partnership between AHRC NYC, BAAD!, and Big Apple Playback Theater. This was accomplished due to the vision of Jason Conover, Sobriety Unit Manager with AHRC NYC’s Family and Clinical Services department, who is also a Fellow under the Quality Improvement department’s Person-Centered Initiative program.  He chose to do a collaborative partnership with Big Apple Playback Theater as the focus of his fellowship year due to his own passion and involvement with acting and being a member of the theater company. 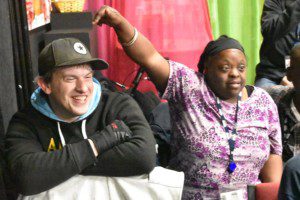 Audience members, such as Monique Williams and Guillermo Dipietrantonio, were encouraged to participate in the performance.

This project took two years of planning and development, culminating in a playback theatre performance at BAAD!, which is located a few short blocks from Styler Center at Ferris Place. After the show, performer Steven Garcia said “This program is great because it helps us express ourselves by teaching us about feelings like happiness and sadness. I love drama.”

Jason met with a group of people supported by AHRC NYC in the Styler Supplemental Day Habilitation program once a week on Tuesdays from 3:30 to 4:30 p.m., sometimes rehearsing at the facility and other times rehearsing in the theatre space at BAAD! where the culminating performance took place. Ash Straw, a Big Apple Playback Theatre company member, came to several rehearsals to teach playback techniques and rehearse with the group.  “It has been a source of joy for me to be here with everyone on Tuesdays,” Ash said. 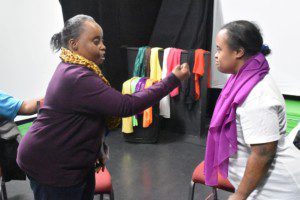