Dancing the Day Away at Triskelion Arts Center

The flowing arms, the intricate steps, the passion apparent on every face—these were the hallmarks of an intimate dance recital performed by people from multiple Day Services programs. 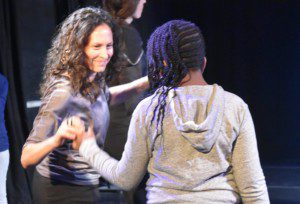 “Anybody wanna dance?” Stefanie Nelson bellowed, encouraging audience members to warm up the dance floor before the event officially began. “Dirty Diana” and other pop hits blared as she spoke. “Take off your jackets and your shoes, this is going to be fun!”

Stefanie, AHRC NYC’s Volunteer Mentor Coordinator, said that she “has a long-standing relationship with Triskelion Arts,” where the performance was held. She frequently dances and choreographs performances in her spare time. “[Dance] is an important expression for everyone,” Stefanie said. “It connects and grounds people. It teaches collaboration, spatial awareness, personal responsibility, control, and release. It is primal, powerful and fun. It offers us heightened moments of sensation making us feel alive and empowered.”

Dancers from AHRC NYC Fisher Day Services, Betty Pendler Day Services, and Kings Highway Day Services kicked off the recital in earnest dancing to a piece entitled “Fssshhhh,” choreographed by Rebeccah Bogue. The title reflected the sound sea critters make as they swim by in the ocean and contained an eclectic selection of music, beginning with Otis Redding’s seminal nautical hit “Sittin’ at the Dock of the Bay.” 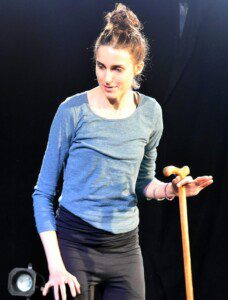 Rebeccah has overcome enormous challenges on her way to continuing her passion for dance. When she was 17 years old and studying ballet at a school in Colorado, she suffered a brain hemorrhage, forcing her into a coma for several months and requiring her to relearn basic motor skills. She recovered well enough to study abroad at the Laban Conservatory in London but tragically suffered another setback related to her brain swelling upon her return. She continues to have difficulties as a result but began volunteering with AHRC NYC to ensure that she was still connected to dance.

“Since I assisted Rebeccah in her workshop rehearsals, I know she worked with an underwater theme, giving images that the dancers could easily relate to – jellyfish, crabs, sea snakes, etc. to help draw different movement qualities out of people without them having to learn ‘steps’, which can be tedious,” Stefanie said.

Through it all, Rebeccah has kept one goal in mind. “I don’t know what I want to do with my life but I want to be happy,” she said. “Dance makes me happy.” 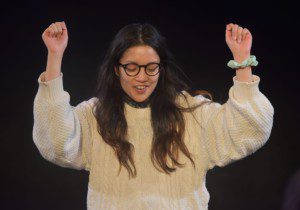 The remaining three dance performances were choreographed in part by Leslie Hubilla, Personal Empowerment Specialist with Day Habilitation Without Walls. Leslie stressed that the dancers themselves provided most of the ideas and she helped to formulate them into dances.

The Hudson Square Dancers, made up of people from Manhattan Day Habilitation (Hudson St.), performed a piece called “Spring Fling.” This featured more contemporary music such as “Uptown Funk” and “Shape of You.” Dancers from Brooklyn Day Hab Without Walls branded themselves as the AHRC Ballers. They used basketball-inspired movements such as the crossover dribble while dancing to an energetic house music piece. Finally, the Rockaway Parkway/Bush Terminal Hummingbirds took the stage with a combination of duet and whole group performances set to the tune of “Cirrus.”

“Dance is something that is universal,” Leslie said as she thanked the audience before inviting everyone on stage to finish the day off with a dance party. “We want to give the people we support the opportunity to create something for themselves.” 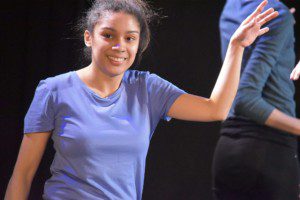 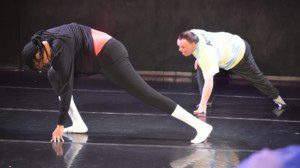 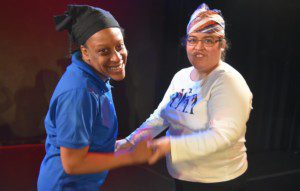