Sixteen corporate partners from the KIND snack corporation lived up to the company name by helping to beautify AHRC NYC’s Cyril Weinberg Day Services garden. Employees worked side-by-side with people from the day program to paint plant holders, take weeds out of the soil, remove ivy from the walls, and more.

Daniel Lubetzky, Founder and CEO of KIND who attended the event, said that volunteerism is integral to his company’s goals. “Our mission from the beginning is to do the kind thing for our bodies, taste buds, and our world,” he said. “It’s a fundamental part of our philosophy that acts of kindness help not only the people you do the acts for but for yourself as well. It’s not just beautiful to do the kind thing, but also a blessing.”

KIND got involved with AHRC New York City through Karen Zuckerman, Director of Community Partner Engagement. “KIND wanted to do a corporate event and saw an advertisement I had put out on some opportunities,” Karen said. “Cyril Weinberg was looking for a garden renovation and this turned out to be a great match.”

The partners began their afternoon of service by taking a tour around the Long Island City-based facility, led by Karen and Witemberg Cabral, Acting Director of Cyril Weinberg Day Center. The group expressed appreciation for the many works of art that line the walls created by talented creative minds such as Sharon Jackson, Arthur Fairchild, and Curtis Alston. 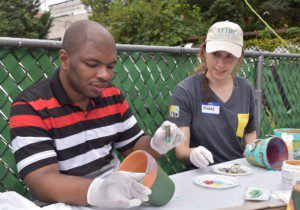 Christian Cameau with Rachel, a KIND employee who volunteered at the event

After the tour, the corporate partners gathered in the garden area, where a number of people from the day program were already hard at work. Some assisted with decorating flower pots with acrylic paint while others helped prepare large wooden planks for an exciting construction plan.

“In that corner, we used to have a dying tree, and now they are working on a lighthouse project,” said Judy Tanibajeva, Art Consultant. “We’d like it to use solar power and motion sensors.” Judy also laid out her vision for the garden. “In a best-case scenario today we will clean all the weeds out and prepare the soil for the winter. We’re going to add more soil and mulch.”

While partnering is not new to KIND employees, each opportunity provides for a unique experience. “It’s great to give back. We’re fortunate to be where we are and do what we do for a living,” said Jeff Chow, who spent most of his time painting planks for the lighthouse. Jeff said that coming to the day center allowed him to reconnect with Jason Lau, Community Support Supervisor. “Jason and I went to middle school together and I haven’t seen him in several years.”

Partnering with Cyril Weinberg was not KIND’s first introduction to AHRC New York City. Dilan Timothy is a supported employee at KIND and has received rave reviews from his colleagues.

“Dilan is such a thrill,” said Su Polowichak. “He keeps things clean and organized, especially the ‘Bar Bar’ [a wall of transparent boxes filled with KIND bars]. Everybody says hello to Dilan, we have conversations about movies and basketball. He makes us feel good! AHRC really introduced us to do the KIND thing with people with disabilities.” 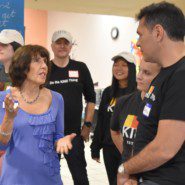 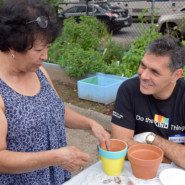 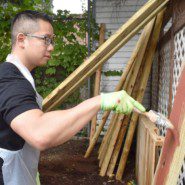 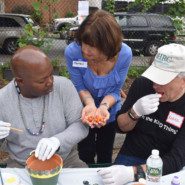