“Dr. Franzem is the personification of [AHRC NYC’s] core ideals,” Walter Dickinson, Assistant Director of Youth Services at Helen Keller Services for the Blind, said. “Dr. Franzem brings old-school values to the new generation and demands a high level of professionalism. He is exactly the type of inspirational role model that I would like to be.”

Karen L. Gourgey, Director of Baruch’s Computer Center for Visually Impaired People, welcomed hundreds of guests to the conference. Later in the day, she was honored with a proclamation from Manhattan Borough President Gale Brewer and surprised by her colleagues as they thanked Karen by naming this and future meetings after her.

The keynote address was given by Microsoft’s Chief Accessibility Officer, Jenny Lay-Flurrie. Jenny, who described herself as “severely, profoundly deaf,” gave a humorous and detailed look at many of Microsoft’s accessibility initiatives and applications, including speech-to-text tools for people with dyslexia, Seeing AI, and Soundscape. In reaffirming the company’s commitment to adaptive technology and hiring more people with disabilities, Jenny said, “Accessibility never has an end destination.” 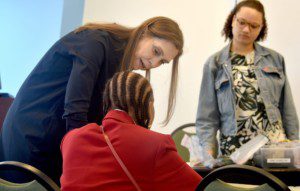 The Met’s Deborah Lutz, instructor of the Seeing Through Drawing class

Conference guests had the option to both go to a morning and afternoon workshop. In one of the early sessions, Deborah Lutz from the Metropolitan Museum of Art presented “Seeing through Drawing,” an art class intended for people with vision challenges. A vendor exhibit afforded guests the chance to view devices and meet with representatives from organizations that primarily assist those with visual impairment.

Dr. Franzem was one five recipients of this year’s Breaking Barriers Award. He has worked closely with Helen Keller Services for years, affording young people with disabilities the chance to intern at AHRC NYC in a variety of capacities. Walter Dickinson said that interns from the past year have worked at AHRC Fisher Day Center, the Melissa Riggio Higher Education Program at the College of Staten Island, and Francis of Paola Early Learning Center. 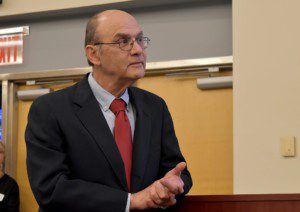 “AHRC NYC firmly believes that what’s important is what a person can do, not what they cannot do,” Dr. Franzem began. “Throughout my life, I’ve had the opportunity to work with people who are visually and hearing impaired and [those] with physical disabilities. When I had the opportunity to start the internship program at AHRC, it was natural that we form alliances with all people. He continued, “Vision and hearing and physical ability are attributes. But it is only an attribute among the many attributes that people have. When people have the opportunity to use their skills and pursue their interests, they amaze [us]. I have been amazed when a person using a wheelchair ends up organizing an exercise group, [or] when someone who is blind ends up facilitating a drama group. We never ask ‘What can we do for you?’ That’s a terrible question. We ask ‘What can you do for us?’ And what they bring is truly amazing.”

AHRC NYC congratulates Dr. Raymond Franzem for this achievement and we thank him for his years of providing employment opportunities for young people with and without disabilities.