On April 24th, senior leadership from across all departments of AHRC New York City attended a day-long workshop focusing on cultural and linguistic competency. The seminar was led by Professor Tawara D. Goode, Director of the National Center for Cultural Competence and Director of Georgetown University’s Center for Excellence in Developmental Disabilities. The workshop used a variety of participatory methods, including small group activities, games, and open discussions. 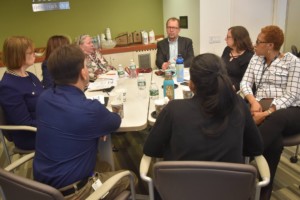 “This is part of a journey to continue improving our corporate culture,” said Marco Damiani, CEO. He said he had connected immediately with Professor Goode several years ago when she gave a similar workshop at YAI and eagerly sought to bring her expertise to AHRC NYC. “We all like to think of ourselves as super-accepting, self-aware, open-minded people. You will find that may not always be the case. We can always do better,” said Marco.

What Does Culture Mean to You?

“Culture is what we do as human beings and an expansion of the things that we are used to doing,” said Steve Williams, Employee Relations Manager/Diversity Officer. Professor Goode defined culture as “the learned and shared knowledge that specific groups use to generate their behavior and interpret their experience of the world.”

Professor Goode encouraged the group to view culture through the lens of an iceberg. Only 10 percent of an iceberg is visible above water, which prevents a complete analysis of its features. “We don’t check below the surface to see if our assumptions are true,” she said. “Cultural competence requires us to see beyond our reflections and beliefs.” 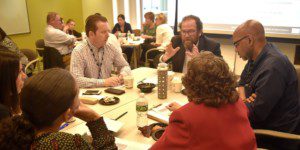 Richard Cohen, Director of the Article 16 Clinic, provided his thoughts about cultural competency to a group of fellow staff members

People provided examples of what they use to define their own cultures. “I define myself locally, first to my [church] parish, then to my city,” said Bob Nugent, Associate Director of Residential Services. “Growing up in the Bronx, I could be on the train and there would be nine different newspapers in nine different languages.” Marcia Richman, Health Care Coordinator for Residential Services, said that “Our culture at AHRC is one of helping.”

Despite many in the room living and/or working in New York City, one of the most culturally and linguistically diverse cities in the world, Professor Goode cautioned against having an outsized view of one’s cultural and linguistic competency. “Just because you serve a diverse population or even a specific population does not make you competent in those cultures,” she said. “People bring their cultural biases and thoughts to work with them too.”

Professor Goode encouraged attendees to stay on top of local and national demographic trends, including which languages other than English are spoken the most in people’s homes. She also made clear that it is paramount to view the people we support in a cultural competency context, as well. “Disability services have largely been stuck on one cultural identity,” Professor Goode said. “The people we support are often juggling multiple types of identity and consequently multiple types of discrimination.” 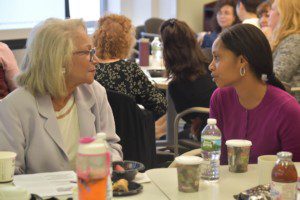 “Professor Tawara Goode is an amazingly powerful presenter who related very well to the members of the Senior Leadership Team and was able to elicit thoughtful conversation,” Ruby Kornfeld, Senior Policy Analyst, said. “She was able to promote her ideas about cultural competency is a way that encouraged AHRC NYC staff to consider how to implement change. Developing a more culturally competent corporate culture will be a challenge and I am looking forward to having Tawara back to help us develop initiatives. This workshop set the stage for the future.”

“She [Professor Goode] brought to light a critical idea voiced by William O’Brien, former CEO of the Hanover Insurance Company: ‘The success of an intervention depends on the interior condition of the intervenor.’ She went to the heart of sustainability and social justice,” said Carole Gothelf and Jennifer Teich from Individualized Supports. “This was an extraordinary day of reflecting on the experiences of the past with opportunities to realize the importance of learning from the future as it emerges. There was a lot of data presented but each time she retreated to an ‘observe, reflect, plan and act’ model. It was about supporting our ability to become ‘generative listeners.’ This is how we move towards sustainable change.”