Eric Goldberg has persevered. The 33-year-old from Staten Island is settling into his role as a preschool teacher, accomplishing a life goal he set out to complete years ago. He is the first to admit that it hasn’t been easy. 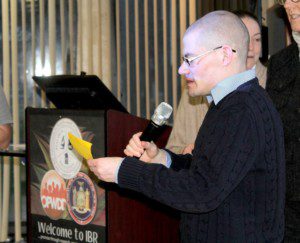 Eric Goldberg delivers a theme that his group identified as key to the day’s conversations.

“I started when I was a kid with severe disabilities—stimming, flapping, the whole gamut,” he recalled. “I got older, I went to school. I was asked to go for my regents, and I said no. That means I was placed in an IEP program, where you don’t get a high school diploma. In this economy, that means you don’t get a job.

“More or less, my life continued. I had a few internships here or there in preschools. I was interning at Bumblebees R Us, where I was told they would hire me. The first thing they said to me was ‘Do you have a high school diploma?’ I said no, so they said they could not hire me. After that, I decided the GED was the only way.”

Eric told his life story flanked by his mother Iris and a former teacher named Karen, who was instrumental in helping him achieve his goal of passing the GED exam, as part of the third edition of Conversations for Change, “an exploration of a better way forward for people with intellectual and developmental disabilities” hosted by the College of Staten Island and sponsored by the Geraldo Rivera Fund for Social Work and Disabilities Studies. On Thursday, December 6th, eight storytellers gave personal anecdotes about how their lives have been affected by disability and how they overcome those challenges. Five of the storytellers including Eric, receive support from AHRC New York City.

Others attending the event listened and asked questions of the raconteurs in an effort to identify key themes of each person’s life, which were then posted at the front of the room at the end of the workshop. “Our success is really based on each individual’s success,” said Michael Weinberg, Associate Director of Residential Services and a member of the Staten Island Developmental Disabilities Council.

Through the support of Karen and mentors at the Melissa Riggio Higher Education Program at CSI and Day Habilitation Without Walls, Eric did eventually pass his GED exam.

“It was a lot of work, a lot of efforts on Karen’s part and other teachers that I had,” Eric said. “It was grueling, it was frustrating at times, it was tough. It wasn’t like I could go home and just sleep. I had to do it with mentors at the Riggio program who would help me.”

“Eric would cry, he would struggle he was anxious,” Karen said. “But he kept on. The main reason for Eric’s success is Eric. He wanted the GED because he wanted to work with children. But he was supported the whole way by his family and by the Riggio program. That makes a difference for all students, but especially for students with disabilities.”

Eric and Iris agreed with Karen about the help mentors have provided to him. “In the beginning of the program I said to myself, ‘I want mentors who won’t push me as hard, or don’t expect me to do as much.’ But when I had mentors who did push, that was when I got a lot done, and those were the mentors at the Melissa Riggio program. It’s been a blessing, between the mentors at Riggio and Day Hab Without Walls and the higher-ups at those programs. The whole program is great and I would recommend it to anybody.”

Today Eric has achieved his goal to become a preschool teacher. “I was given an opportunity to go to preschool and I want to give back,” he said. Iris said that Eric would now “like to strive for other independent goals” and seek to take more certification exams to ensure that his work as an educator can continue. “You gotta work to get what you need,” Eric said. “You can’t expect success to just come to you.”