Working at BCCO NYC, (The Broadway Custom Company,) Mei Zhi Zhaung and Pascual Santiago cut and weeded vinyl designs with the celestial phrase plastered on them, along with a cute little spaceman illustration. Mei Zhi and Pascual have become valued employees at the family-owned printing business, which recently moved to a bigger office at their midtown headquarters inside the Ed Sullivan Theater building. 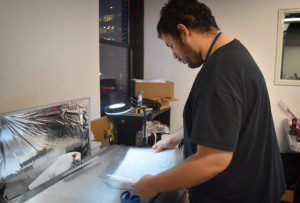 Pascual has been with BCCO NYC for years now, first as an intern and now as paid employee with a mutually agreed-upon schedule. Mei Zhi was part of the first cohort for a joint training program run by BCCO NYC and AHRC New York City’s Supported Employment program and was recently hired after completing her internship. She is the first trainee to be hired. 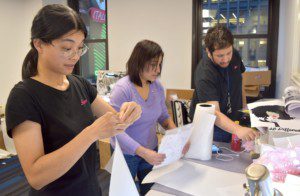 “[Pascual and Mei Zhi] are cooperating, and they all help each other out here,” Elizabeth Peris, Job Coach, said. “Mei Zhi is doing great here because she listens so well. Anything new we show her, she does it. She never says no or won’t at least try to do something.”

Peter Doherty, Employment Skills Coordinator, was the lead trainer for the cohort. He has seen Mei Zhi’s and Pascual’s skills expand rapidly. “Today, they are working on printable vinyl as opposed to heat-transfer vinyl, which is what they were initially trained in,” Peter said. “Mei Zhi caught on immediately to the new process.”

Peter said that BCCO NYC is getting a direct-to-garment machine soon that Pascual will be trained to use. BCCO NYC also plans to train Mei Zhi on their T-shirt pressing machine. With the second training cohort starting soon, Peter indicated that the program may have to be modified.

“It’s a work in progress. We’re learning as we go along,” he said. “With their recent expansion, we’re trying to figure out what their needs will be. We may have to adjust our training with new technology.”

A Lasting Partnership with The Broadway Custom Company

Dmitri Patsalos is one of the owners and operators of BCCO NYC. Inspired by their brother Alexander, who is a student at the Melissa Riggio Higher Education Program at Hostos Community College, Dmitri and his family have a made commitment to training and hiring employees with disabilities.

“Our little brother has special needs. We’ve seen the difficulties they can have when they go into the real world,” Dmitri said. “We believe everybody can do this job if they have the proper ability and training. If they want to be here, we want them here.”

The welcoming environment at BCCO NYC has ensured effective work and happy employees. 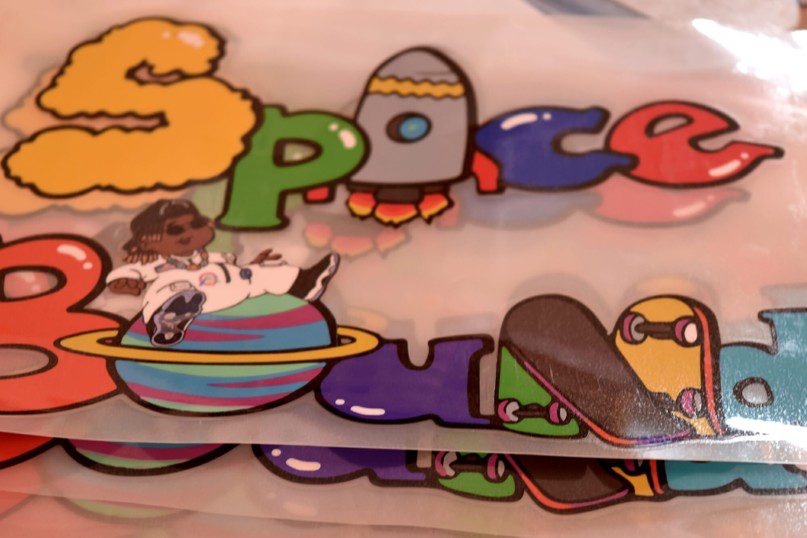 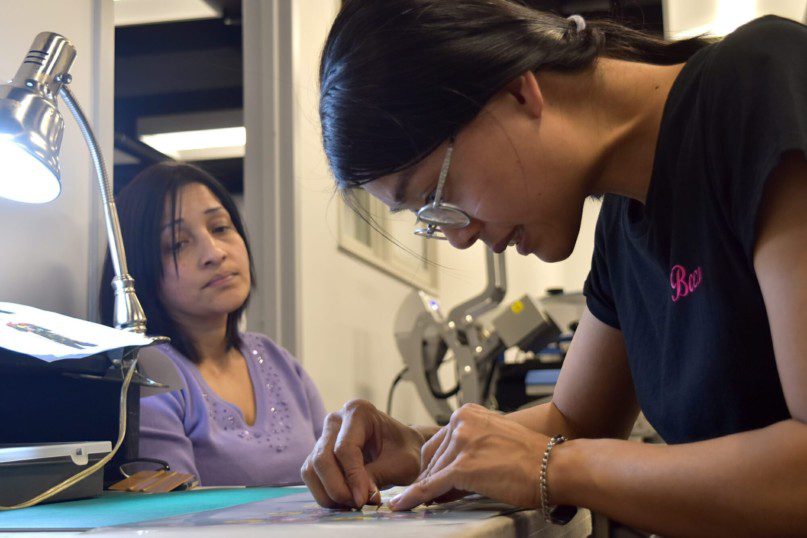 “All my friends are here and my bosses are really nice to me,” Pascual said. “And I’m fast at this job.”

For Pascual and Mei Zhi, space is the limit at BCCO NYC.