Donning her minion costume, she and other HSBC employees and their children gathered for the Halloween Extravaganza on Oct. 28 with the students, teachers, and their families. The event, made possible thanks to part of an HSBC grant, was celebrated remotely via Zoom. Boxes filled with crafts, candy, and cookies were sent to all participants beforehand. 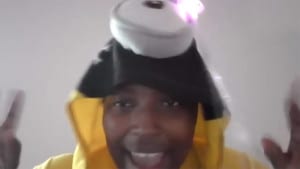 “The event was phenomenal, and provided a warm feeling inside to see the joy on the faces of those participating,” Kesha said. “The work is easy when you are doing something that you love. The team never looked at the event as one for children with disabilities, but an event with accommodations for all.”

The beauty of the event was that it was difficult to identify the AHRC NYC students from the others.  “It was so nice and generous of AHRC NYC & HSBC to hold this event for the kids,” said Christine Clements, whose daughter Gabby, a third-grader, attended as a Minnie Mouse Witch.

Gabby, a third-grader, attended as a Minnie Mouse Witch

Karen Zuckerman, AHRC NYC’s Director of Community Partner Engagement, Kesha, and her colleague Marina Gaines-Silva collaborated on the event for princesses, superheroes, Waldo, a Fireman, and many others.

“Today’s activities seem to have been enjoyed by all from what I could see,” said Marina, whose grandchildren were among the participants.

“The event was definitely a motivator for Gabby,” Christine said, adding how excited her daughter was to place spiders on her pumpkin. “After coloring in her witch, she was pretend playing that the witch was flying on her broom around the house. This definitely makes up for not being able to have the normal Halloween festivities.”

Once the event ended, Gabby wanted to go Trick or Treating. She wouldn’t get out of her costume, so Christine headed to her family’s nearby home, where they pretended it was Halloween.

“We are so excited that, during these difficult times of Covid-19, we have corporate partners like HSBC, which make it possible for the people we support to celebrate the holidays in a ‘new normal’ environment,” Karen said.