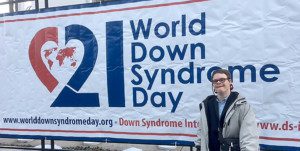 March 21st was World Down Syndrome Day. This year Jamie Dolan, who receives services at Day Hab Without Walls, was invited to speak at the World Down Syndrome Day Conference held at the United Nations, to make a presentation to people from around the globe. Jamie’s speech was made possible by the use of an assistive speech device that he received over a year ago, with support from Assistive Technology Specialist, Lorraine Cohen. Staff from AHRC New York City, YAI, and Jamie’s family members helped Jamie to customize his device, broadening his opportunity to interact with others and share information about himself and his experiences.

Jamie has always been friendly and approachable and the device he used to communicate has helped him to broaden his network of connections with people in his neighborhood and beyond.

Speaking at the United Nations 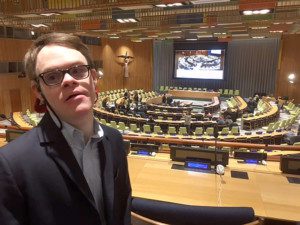 Jamie prepares for his speech to the United Nations

At the UN Jamie represented the National Down Syndrome Society where he works one afternoon per week, preparing informational kits about the needs and abilities of people with Down Syndrome.

Jamie was the only person at the conference using speech augmentation. He introduced himself and added, “I am 31 years old. I am a self-advocate. I advocate for myself by doing a good job. And I make people happy when I say, ‘Have a nice day.’”

One particular issue that Jamie advocated for at the conference was finding an affordable apartment. “I want to be more independent and live with friends. I want to live in New York City near my family.” In the past, Jamie has participated in demonstrations and volunteered for politicians who support better funding for people with disabilities. He said, “Many people with disabilities have speech and hearing problems, but we have a voice!”

Role Model in the Use of Assistive Technology

Lorraine Cohen said, “It’s no surprise that Jamie’s awesome achievement has also made him an instant, and well-needed, role model for children and adolescents who use technology to speak. As a result, Jamie’s story will soon be featured on the Saltillo website, the company that manufactures his communication device, and also serves as a valuable resource for parents, professionals, and people who use devices. There, Jamie’s story will also serve to inspire and encourage parents to envision a future for their children that includes possibilities, opportunities, and achievements that once seemed out of reach. I think Stephen Hawking would agree!”

Jamie uses his device daily, and is an active member of his community, being well-known in his neighborhood – his local pizza shop owner, and barber to name a few. Through support programs at AHRC NYC and YAI Jamie volunteers at his neighborhood library, deliver lunches to house-bound seniors, and helps prepare lunches for seniors at a local center. These relationships are richer and stronger thanks to Jamie’s device!