On the day that sports radio legend Mike Francesca called it a career, a new generation of fans was ready to lead the conversation. Six sports fans from AHRC New York City’s Employment and Business Services – Manhattan met at Brookfield Place in lower Manhattan for the last Sports Talk group meeting of 2017 on Friday, December 15th.

Kicking Off a New Group

“I decided to combine my two passions—volunteering and sports,” said Matthew Utnick, the founder of the Sports Talk group. Matthew works in downtown Manhattan, where his fellow employee Alexa Aranjo started Money Makes Sense, a financial literacy program for people with disabilities.

“I saw [Alexa] being honored at a networking event, and I decided that I wanted to create a program that was more aligned with my passions,” Matthew said. “When you’re doing something you’re passionate about, it’s not work.” Matthew got in touch with Karen Zuckerman, Director of Community Partner Engagement, and the Sports Talk group held its first meeting in summer 2017.

The Giants, Giancarlo, and More 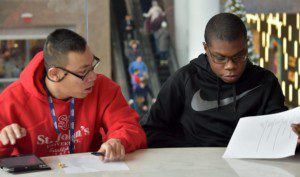 Much of the discussion that Friday centered on the previous night’s Tribute to the Troops, an annual WWE special where wrestlers perform in front of military members. “I watched the Shield, Rusev, and Aiden English,” Johnny Hilario said.

Alex Feliciano and Juan Reynoso had a discussion about who’s football team is more disappointing—Alex’s New York Jets or Juan’s Oakland Raiders. “It’s annoying because the Patriots are always better than [the Jets],” Alex said. This year is no exception—the Patriots will make their 14th playoff appearance in the past 15 seasons, and the Jets will continue their long history of mediocrity. Juan did not disagree but said that he and other football fans expected a more competitive Raiders team this season. 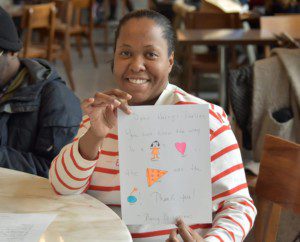 CSS, Nancy Bernard, of EBS Manhattan writes a thank you letter to Harry’s Italian for providing food to the group

Matthew then handed out a trivia sheet he created containing multiple-choice questions referencing current sports and events and some other general-knowledge questions. Topics included the Yankees’ recent acquisition of reigning National League MVP Giancarlo Stanton, the upcoming College Football Playoff, where the 2018 Winter Olympics will be held (South Korea), and the first NFL head coach to be fired this season (Ben McAdoo, formerly of the New York Giants).

Excited for the Future

The group finished the year by eating pizza and cupcakes and writing thank-you letters to the establishments that had provided the food. Sports Talk will take a hiatus while Matthew has his first child in January and goes on paternity leave. But for the group’s founder, the results so far have exceeded his expectations.

“Sports are great, but this has become more of a social group where we can talk about anything,” he said. “I used to help with the Special Olympics and the Arc of Monmouth, and I thought I didn’t have the time to give back anymore. But I’m so grateful I met Karen and started this group.”