Luisa Frias and Jouan Pepin are just two of the many incredible staff members of AHRC New York City’s In-Home Supports. They have taken different routes before finding a rewarding career at AHRC NYC.

Jouan was in college, studying to become a pharmacy technician. It was a complicated field and it didn’t take long for him to realize that finding employment would be difficult. Then he met a group of individuals from AHRC NYC while attending a job fair, where his life changed forever.

“I learned about them; some had autism and other developmental disabilities,” he said. “I myself am on the spectrum. This job could be great. Who better to provide services for them than someone like them?”

Luisa worked as a cashier at McDonald’s for some time before working as a bank teller for three years. “My line was always the longest at McDonald’s because I had good conversations with the customers,” she said. She was missing that stronger human connection. “I like to help people,” Luisa said. 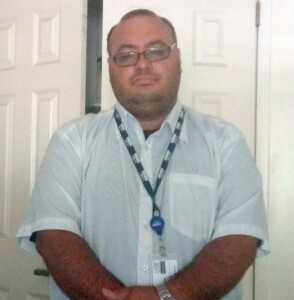 Since joining AHRC NYC in 2011, Luisa, a Home Health Aide, has developed strong bonds with the people she supports. One elderly gentleman, whom she worked with for three years, moved to a nursing home. With no family, she would visit him regularly, she said.  “When you care for someone, even when you’re not working with them, you don’t stop caring.”

For Jouan, a Residential Habilitation Counselor, working in the home of a person he supports puts them more at ease. “This is a safe place for them and they can feel free to discuss whatever they like to discuss,” he said. “I will not judge you.”

Whether it’s discussing wrestling with someone he supports or going outside with a person who was frightened to do so, Jouan finds his work rewarding.

“You Can See Progress”

“The most rewarding part of this line of work is just knowing you can see progress,” Jouan said.

Helping people comes naturally to Luisa.  “When the people I support are happy and in a good mood,  that means you’re doing something good with them,” Luisa said. “ When they haven’t seen me in a while and say, ’I missed you,’  it makes me feel good.”

That’s the most rewarding part of the job for Luisa. She learns about each person and what makes them happy.

“The relationship she has established with the people she has supported throughout the years and her fellow teammates can be used as an example for our agency,” said Monica De La Paz, AHRC NYC’s Senior Staffing Coordinator. “She has worked with many of the people AHRC NYC supports and different services we provide from Community Hab, Traumatic Brain Injury, and the Home Care Department.”

Jouan encourages the people he supports to move forward in any way they can. The goal is to grow more independent.  His mother was his coach, helping him after he was diagnosed at age 12 with what was then known as Asperger’s syndrome. “I know kids can be something in their lives,” he said. “They don’t need to let the disability define them.”

“Jouan is the best cheerleader for the people he works with,” Monica said. “He constantly reminds them they can achieve anything they desire with hard work and perseverance.  His dedication, his willingness to make sure the people he supports are able to achieve what they want and or need is so admirable that I wish we can replicate him.”