A new volunteer program has gotten underway at AHRC New York City! Our One-for-One program pairs volunteers from both within the agency and in the community with a person with developmental disabilities. It is run by the Residential Services Department and funded by the AHRC New York City Foundation. On Wednesday, January 21, volunteers met up with people living at the Rupert Towers IRA on the Upper East Side at Uno’s Pizzeria on East 86th Street.

“The program was a suggestion from Sharyn VanReepinghen [AHRC New York City’s First Vice President],” Craig Becker, Associate Director of Residential Services, said. “It is something we wanted to do for a long time, getting adults we serve matched up with people in the community.” Craig put together a proposal for the board of directors and for the AHRC New York City Foundation that took cues from Big Brothers/Big Sisters, a well-known organization pairing volunteers with at-risk youth. In May 2014, the Foundation approved a grant for the program, which was used to bring on Stefanie Nelson, the One-for-One Volunteer Coordinator. While One-for-One was initially intended to focus on people living in AHRC New York City residences who were fairly independent already, (and potentially looking to move into the community), “we have broadened the idea to include people who aren’t as independent but would still like to build long-term relationships,” Craig said. 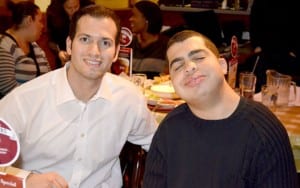 At Uno’s, five pairs were matched up for the first time. Joseph Morocco, who works in real estate and is part of the Foundation’s Young Leadership Committee, was matched with Peter VanReepinghen (Sharyn’s son). “I found out about [One-for-One] through a mutual friend involved, and I always like to make new friends,” Joseph said. Peter works at the Disney store and said he enjoys video games and sports. “My favorite character is Mickey!” he exclaimed, and Joseph wholeheartedly agreed.

Shanna Salmon, the HR Coordinator, volunteered for One-to-One for a very simple reason. “I just wanted to meet someone new and get involved in the community,” she said. “This program seemed like a great match,” Shanna said while she briefly worked with people with developmental disabilities at a summer camp while in high school, she had not had much more experience with the population. She was paired with Diana Oquendo, a Rupert Towers resident who “wanted someone to talk to and everything.” Diana works at Metropolitan Hospital and enjoys cooking Spanish food, and much like Shanna, going shopping. They also both like films, and agreed to meet later in February to have dinner and see The Wedding Ringer.

Stefanie has used many outlets to find volunteers, including sites such as VolunteerMatch and programs like the aforementioned Young Leadership Committee. There are currently 14 participants in One-for-One (seven pairs), with five more volunteers waiting for orientation. “Currently Rupert Towers and Fineson IRA in Manhattan are part of it, and I am now interviewing people in Queens and Staten Island,” Stefanie said. “It has reached out quicker than we thought it would. People from out of the blue have been calling.”

Craig and Stefanie’s vision for One-for-One is to have 25 volunteers by the end of the year.

Next year they would like to expand to people who don’t live in AHRC New York City residences. They also expressed a desire for AHRC staff to join One-for-One. “I and many of my colleagues have had long-term relationships with people we serve, but we are still viewed as employees of the agency,” Craig said. “We would love people who aren’t necessarily working directly with people we serve to get involved.”

Will match people living in AHRC residences and attending AHRC programs with volunteers from the community based on common interests and common points of view. Both people will need to commit to a partnership of at least a year, ideally growing into a longer, perhaps lifetime relationship. Volunteers and those supported will spend leisure time together to bridge the gap between people with intellectual disabilities and their neighborhoods.

To volunteer for the ONE-for-ONE program, email Stefanie Nelson.