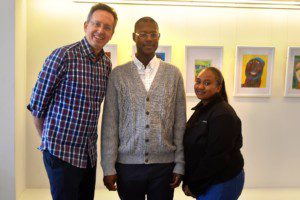 Artists Timotheus Davis, Devona Gamble, and Oswald James from AHRC Fisher Day Services are having their paintings exhibited at Poe Park Visitors Center in the Bronx. A welcoming ceremony was held on Saturday, April 6th. Jon Bunge, Art Consultant, visited Lucy Aponte, an employee at Poe Park, to help coordinate the exhibition. The connection between John and Lucy was made by Miguel Diaz Andino, a Community Support Professional at Fisher Center, who once led a literature workshop at the park.

“John walked in and wanted to know what this space was,” Lucy recalled. “It’s a gallery and exhibition space, a multi-use cultural center. We wanted to do an exhibition in honor of Autism Awareness Month and John said he worked with a few artists [on the autism spectrum]. I asked him to send me some samples and they were great.”

John said that Timotheus and Devona, who were able to make it to the exhibit’s opening event, frequently use art history as a starting point. “Timotheus enjoys interpreting the work of artists such as Cezzane, Picasso, Van Gogh, and an African-American artist named William Johnson. He especially likes the landscape paintings of Cezzane.

“Devona is often, but not always, looking at famous paintings,” John continued. “We love her use of colors. Timotheus is generally a little closer to the original image.” One notable aspect of Devona’s style is the use of a characteristic nose—long and wide with a prominent upwards hook where the nostrils meet.

Oswald’s art is far more abstract than that of his colleagues. His psychedelic drawings are drawn with various colored pencils, which particularly impressed Lucy. “All the work is so colorful. It’s beautiful and expressive. It takes a lot of talent to do abstracts like these in pencil,” she said.

Domali Chin, a Direct Support Professional, works at Timotheus’s residence and was amazed by his prolific paintings. “Sometimes he just draws for fun at home,” she said. “We like to have colorful paper on hand at home for him. He’s so talented.”

The bright colors prominent in all three artists’ work are in sharp contrast to the namesake of Poe Park. Just down a pathway from the visitor’s center stands the final home of Edgar Allen Poe, one of America’s foremost masters of gothic poetry and prose. Poe moved there in 1846 with his wife Virginia in the hopes that the (then) open-air in the Fordham section of the Bronx would beneficial for her tuberculosis. Virginia passed away in early January 1847; her deathbed remains at the cottage today. 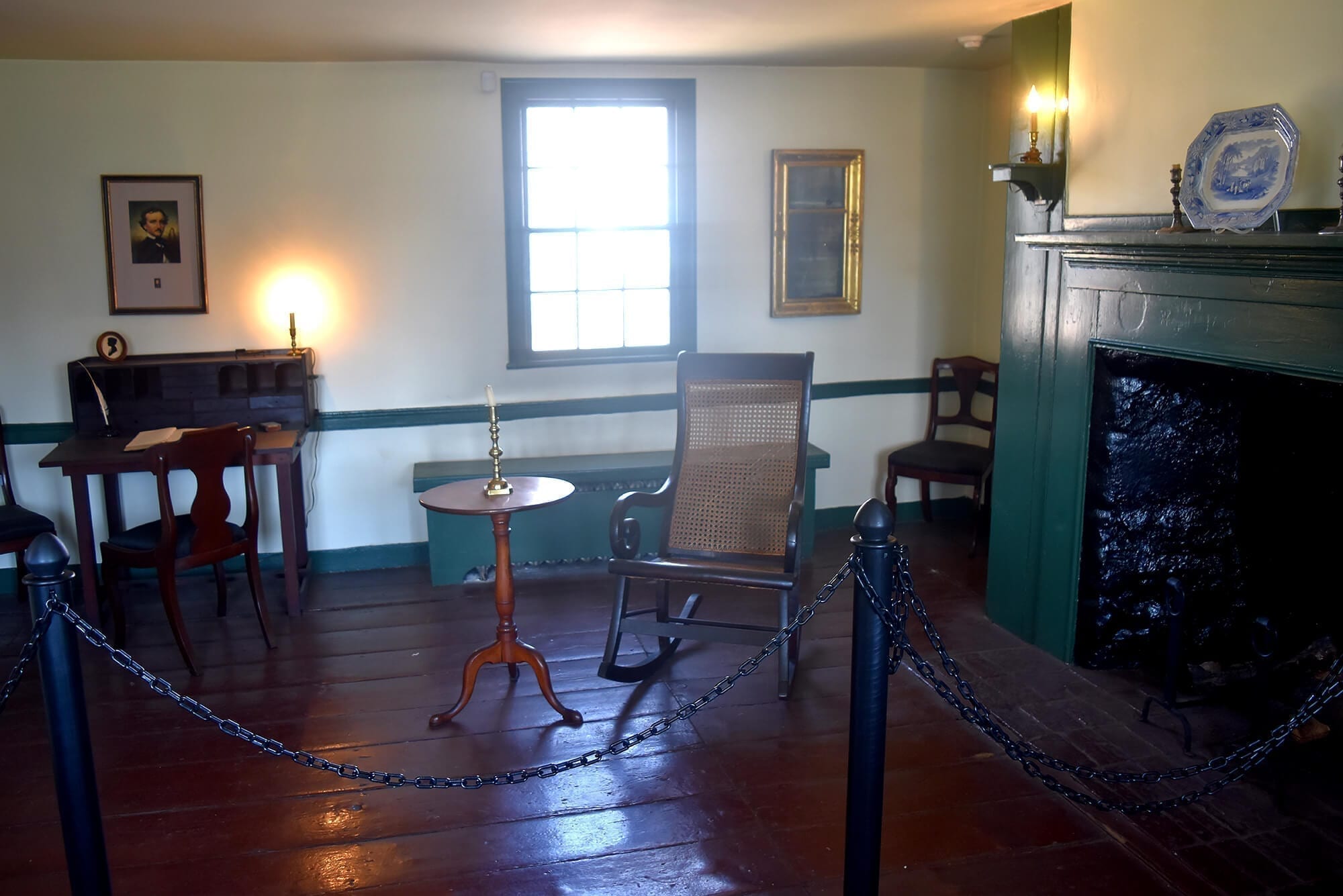 The interior of Edgar Allen Poe’s cottage in the Bronx. The rocking chair on the right was used by the author.

The couple rented the home from a wealthy family for $100 per year. Poe, struggling financially his entire career, remained at the home until his death in October 1849 in Baltimore. He enjoyed walking on the nearby High Bridge for inspiration. Poe wrote some of his most enduring works in the Bronx, including the poems “The Bells” and “Annabel Lee” and the cryptic short story “The Cask of Amontillado.”

Poe Park Visitors Center is open from 9:00 am to 5:00 pm, Tuesdays thru Saturdays. The exhibition featuring Timotheus, Devona, and Oswald will be on display until April 27th.