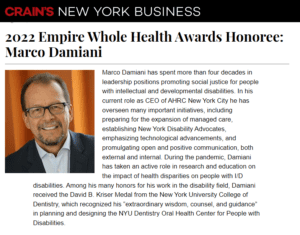 “Marco Damiani has spent more than four decades in leadership positions promoting social justice for people with intellectual and developmental disabilities. In his current role as CEO of AHRC New York City, he has overseen many important initiatives, including preparing for the expansion of managed care, establishing New York Disability Advocates, emphasizing technological advancements, and promulgating open and positive communication, both external and internal. During the pandemic, Damiani has taken an active role in research and education on the impact of health disparities on people with I/D disabilities.”

Read More About the Honor