AHRC New York City’s professional wrestling discussion groups were surprised with a visit from two performers signed to All Elite Wrestling, a national promotion with weekly shows on TNT. Sammy Guevara and Rebel each spent 30 minutes sharing stories from their careers, trash-talking their opponents, and even asking for suggestions on their next matchups. They joined ahead of AEW’s show at UBS Arena on Wednesday, December 8th; the promotion will be back in the NYC area on January 5th.

The discussion groups are facilitated by Justin Howe and Les Mildenberg, two community partners working with wrestling fans from AHRC NYC programs on Tuesdays and Thursdays, respectively. Justin and Les go over the current events in wrestling from the major promotions and provide historical background in an open-ended, largely freeform chat. The AEW wrestlers joining them was a thrill for all involved.

Rebel with a Cause

Rebel, whose real name is Tanea Brooks, said that she wasn’t initially immersed in the culture of pro wrestling like many of her peers.

“I grew up so far out in the country in Oklahoma that I didn’t even get the TV channels that showed wrestling,” she said. Rebel is a licensed cosmetologist and was introduced to pro wrestling through mutual friends in the industry, quickly falling in love once she started training in 2014. 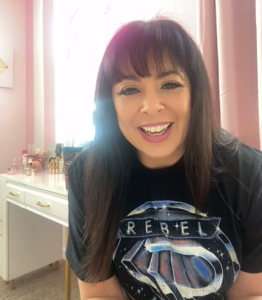 “I was thrown into the fire—I had my first match within three months of first getting in the ring,” Rebel recalled. Les commented that Rebel had many classic matchups with legendary female performers while performing with Impact Wrestling, part of a recent renaissance for women’s wrestling over the past few years.

“We’re getting more matches, more time on TV now,” Rebel said of female performers. “We’re getting more than just slumber party matches. When young girls come up to us and tell us how much it means to them, it really touches my heart.”

Ned Bealy was curious about how long the wrestlers are on the road. With a weekly TV schedule and independent bookings, pro wrestlers often spend as much time traveling as they do honing their in-ring craft. “It’s a lot of time to be away from home,” Rebel admitted, but the thrill of pulling off a big match, like the now-famous Light Out match from March 17, provides a rush like no other.

“It was scary and stressful but all that fear, all that stress—this is why we do it. All the mental and physical anguish, this makes it all worth it. I was very honored to be a part of history like that.”

Sammy Guevara informed the group that he was quickly approaching an important milestone.

“December 11th will be my 11th year in wrestling,” Sammy said. The 28-year-old has wowed fans with his innovative offense, fast-paced style, and breathtaking maneuvers on his way to becoming the fifth TNT Champion. 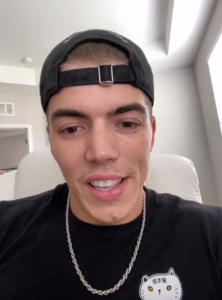 “My destiny has always been to be the number one wrestler in the world,” Sammy said. “We’re gonna keep working until I’m there.”

Justin was curious who Sammy was most influenced by growing up in Houston, Texas. “I loved Rey Mysterio, Goldberg, and especially Eddie Guerrero,” Sammy said. He was also a huge fan of the legendary Chris Jericho, who has become an on-screen ally and an off-screen mentor.

“Jericho’s been doing this longer than I’ve been alive!” Sammy said with a smile. “I can text him at any point and he’ll give me feedback about my matches. It’s surreal. I used to do Codebreakers [Jericho’s finishing move] in my backyard and now I’m tag-teaming with the guy.”

Karen Zuckerman, AHRC NYC’s Director of Community Partner Engagement, asked Sammy if he had any advice for the group members.

“It just like I would say to a young wrestler–you can do anything, just work hard and believe in yourself,” Sammy said. “If you give it your best, no one can ask you for more.”

AEW Dynamite airs Wednesdays at 8 p.m. and AEW Rampage airs Fridays at 10 p.m., both on TNT.