Colleagues from AHRC New York City’s Employee and Business Services recognized one another, reflected on a difficult year, and celebrated new beginnings at the return of their annual picnic on Thursday, May 13th. The event was held on Staten Island in the backyard of EBS’s new facility at 136 Bay Street, which along with the department’s nearby home at 25 Victory Boulevard will continue to support people with disabilities, their families, and community partners.

Persevering Through the Pandemic

“We’re happy to say that AHRC has gotten through COVID—it was not an easy task, quite honestly,” said Steve Towler, Vice President of Programs and Business Development. He explained that EBS was able to have a better-than-expected year financially as Hudson River Services expanded its services to include COVID disinfection at many sites around the city, including with the FDNY. Steve proudly shared that EBS did not lose a single contract throughout the pandemic and maintained its status “as one of the larger workforce providers on Staten Island. 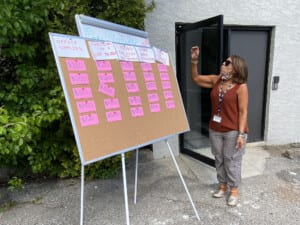 Return to the office-themed Jeopardy was a huge hit.

“Many of the people here today continue it to support people in the community, helping people be safe as they contribute to work,” Steve said. Despite the many challenges brought on by the pandemic, people supported by EBS and the staff members who work with them stayed true to the founding principles of the department—supporting people with disabilities to prepare for employment, and find employment that suits their needs and goals, and maintain employment.

Moving forward, EBS has reorganized itself into two regions encompassing North (the Bronx, portions of Westchester, and Queens) and South (Brooklyn, Manhattan, and Staten Island). The department also recently received a grant to encourage COVID-19 vaccinations among people supported and staff members; each borough has been assigned a vaccination ambassador to help coordinate the effort. 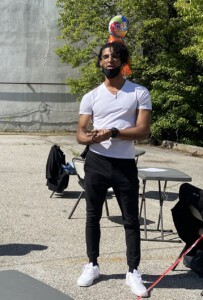 The picnic was not only an opportunity for colleagues to recognize each other after a year of separation and continuing hard work, but also a chance for some coworkers to meet in person for the first time since being hired during the pandemic. Colleagues were given tours of 136 Bay Street, signed their names and handprints to a welcoming board, and played a special round of returning-to-the-office-themed Jeopardy!

Omari Dejesus, an Administrative Assistant, was among those recognized by his colleagues. “I can’t say enough about how AHRC NYC, specifically EBS-Staten Island, has impacted me both professionally and personally,” he said. “In reflecting on the celebration, I must say how great it is that this organization has shown recognition to its people who do everything to push the agenda forward for the collective. I couldn’t be the success that I am had it not been for the team I have had surrounding me. During times of uncertainty, my position with AHRC has been the bedrock of my sanity, consistency, and stability. The selfless supports we offer our individuals and our students continue to inspire me. Seeing how we have all grown together continues to astonish me, and I know this is only the beginning.”