On the Right Track with Lee Cornwell and his Model Trains

The 4 train runs through Lee Cornwell’s apartment. So do Gilded Age relics like the Santa Fe Railway and the Union Pacific Railroad. Not literally, of course—that would be a major inconvenience. Throughout Lee’s lifetime, he has perfected the art of model train construction.

“You ain’t never seen a train running like this,” Lee asserted as he meticulously checked each track, wire, and train car to ensure that the railroads chug along smoothly.

Lee’s Bronx apartment set-up is nothing short of a miniature mechanical miracle. Three levels of sturdy wood form the foundation for the triumvirate of train lines, which Lee identified as his favorites through years of research. 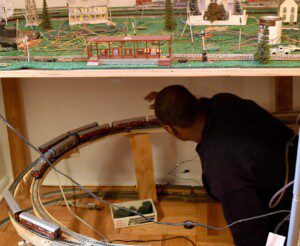 Trains have long been fascinating to Lee. “I could not tell you when I started liking trains,” he said. “It’s been a long time. My father and grandfather used to have a Lionel train set. I started looking in modeling magazines and that gave me different ideas.”

The real-life Atchison, Topeka, and Santa Fe Railway is now defunct, but for over a century it served areas west of the Mississippi River for both freight and passenger purposes. Union Pacific remains a dominant freight company headquartered in Omaha, and when not bogged down with delays the 4 train runs from Crown Heights up Manhattan’s Lexington Avenue before terminating in the Woodlawn section of the Bronx.

“This all took a full year to build,” Lee said. He had previously built the tracks in his old apartment but had to strip it all down and build it back up once he moved. “I had to clean all the wheels and clean every track to make it sure it worked again.”

Lee lives alone and works at a Target store in Queens. Much of his spare time is devoted to his model trains, but he also enjoys going to church, where he plays drums with the church band. His breadth of knowledge about the trains, from specific model numbers to future purchases he has in mind, to the minutiae of how each track operates, amazes anyone who spends even a short time in the apartment.

“I got his case about a year ago and the train tracks had already been built up,” Emily Sanchez, Field Supervisor, Home Care Services, said. “It’s awe-inspiring, I’ve never seen anything like it.”

“The first thing you say is ‘Wow,’” said Latosha Petrus, Residential Habilitation Coordinator. “It’s so detailed and specific and intricate. You can see the passion and the talent.”

Despite the praise, Lee is humble about his mastery of a difficult hobby. “I thank God that He give me the wisdom to do these trains,” he said. 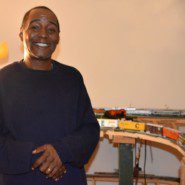 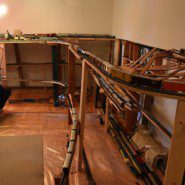 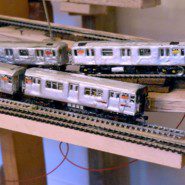