For more than a decade, AHRC New York City’s Kensington residence in Staten Island has hosted a small holiday party with family and friends, music, and food, with Santa Claus paying a visit to the residents at the end. The ongoing COVID-19 pandemic threatened to throw the party plans into disarray, risking a holiday without a greeting from the residents’ favorite visitor.

“We always have a particular person from outside the residence come as Santa,” said Sandra Amato, Administrative Assistant with Residential Services. “This year that person would have been unable to come into the house to meet with residents due to our COVID restrictions.”

As the men and women continued to ask about a party, and even more so their special visitor, over the past few weeks, the Kensington team began looking for a costume. Sandra eventually found one through Facebook connections. But then the question became, “who would be Santa?” 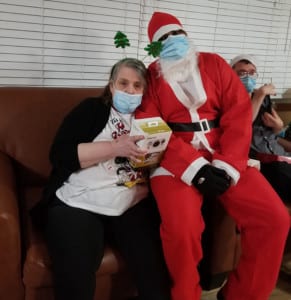 George Sanchez, Community Support Professional, has worked at the residence since the early spring, right as the pandemic made it impossible for him to continue providing services in the community with Staten Island Day Hab Without Walls.

“I’ve been here since March. I’ve come a long way from then, and I’ve built a relationship with the people here,” George said. In the past few weeks, he gained a deeper understanding of what the holiday season means to Kensington residents and just how much the residents look forward to seeing Santa every year.

“The people that work here still wanted to bring that joy,” he explained. “They asked me if it would be ok if I played Santa this year. I’ve never done it but if it would make people’s holidays better, especially with the pandemic, I wouldn’t mind.

“I went downstairs to the basement, changed into the costume, and put on boots so I wouldn’t be recognized,” George continued. “I think some of them knew it was me and some of them didn’t. It was just great to see all their faces not expecting to see Santa that day. There is one nonverbal resident and I got to see her smile. You can’t replace that feeling.”

Together as AHRC for the Holidays and Beyond

Danielle Eilenberg, Assistant Director for Residential Services, was happy to see the widespread joy after an immensely difficult year.

“George has been here since the beginning of the pandemic,” she said. “He fit the suit and said ‘I’m gonna do it.’ It was nice we were able to continue that tradition. The men and women that live here would have been heartbroken if they didn’t have a Santa.”

George said he will continue to assist at the residence in any way he can. “If they need my help, I have no problem giving my help,” he said. “It’s AHRC and we are all here together as a team.

“I’ve built a lot of relationships with the staff and people we support. The day when I go back to my department, whenever that is, I don’t mind stopping by on a weekend to say hello. That’s why I do this job. Yes, I get paid, but the relationships I build with people, they should always continue to grow no matter what new opportunities come.”