“I had a chance to visit the school last year during my campaign,” Senator Gournades said. “I was really impressed with everything I saw, so as soon as I got to Albany and I saw an opportunity to help the school, I jumped on it.”

Parents Speak About the School’s Impact

Senator Gounardes then visited a few classrooms to observe and participate in the instruction, including watching a science lesson in Ms. Rebecca’s class, stirring the “witches brew” in a Halloween-themed literacy lesson in Ms. Gabriella’s classroom, and interacting with students in Ms. Katie’s art room. He also joined in on some of the exercises during gym class. 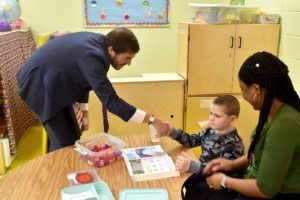 After touring the school, the senator reconvened in Ms. Polanco’s office to hear directly from Anissa and Courtney about the crises afflicting non-public special education schools such as BBF. For years, New York State has failed to equally fund these schools, leading to staffing shortages, cuts in services, and ultimately many school closings, especially at the preschool level. Parents such as Anissa and Courtney are terrified of the future for their children if these trends continue.

“My son, Henry, has been at this school for six years and this is his 15th homeroom teacher,” Courtney said. “The teacher turnover rate is crushing his education goals. He is 10-and-a-half and he needs consistency now.” Courtney and Anissa provided powerful, emotional testimony demonstrating how the school has become part of their lives.

“I do not know where we would be without this school,” Anissa said. She praised the close collaboration she experiences with her son’s teacher, psychologist, and social worker, stressing that the DOE could never provide comparable services. “Every new accomplishment, it’s like ‘I can’t believe this is happening.’” 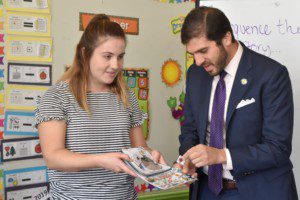 Chris Treiber gave hard numbers to reinforce the special education crisis. “The kids here are funded by tuition almost $50,000 less [per student] than their District 75 counterparts. You look at this and you say ‘How is it possible that they are able to operate this amazing quality program?’ and it’s just because of the fact that they have all of these great teachers. They can get a call tomorrow and lose five teachers instantly because the DOE can offer them $25,000 more in salary. This happens every term.” He added that teachers at BBF and similar schools work a 12-month school year, while public school teachers are paid far more to work a 10-month schedule.

“You rely on faith and passion from these teachers and that is not going to solve this problem,” Marco said to Senator Gounardes, also noting that I/DD agencies in the state have gone nearly 10 years without a cost-of-living adjustment; this combined with an increase in the need for services and rising revenues have left many agencies in dire financial straits. 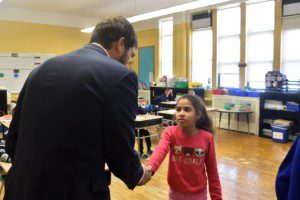 “We are successful in spite of the system,” Marco said. “The demand for I/DD services is growing and agencies are failing. Organizations need to have a significant trend in their operating expenses to become sustainable especially as we move towards managed care, which is a big priority of the governor.”

Senator Gounardes expressed his support for the school and the parents and pledged to do all that he can to assuage these funding disparities. He mentioned that he has been involved with hearings in the State Senate’s Education Committee and would bring these issues back with him to Albany.

“Education is the silver bullet for life,” Senator Gounardes said. “Every child deserves a chance at a world-class education to put them on a path to a sustainable, productive future. I can’t promise a result but I can promise the advocacy and the focus and attention on it.”