Singers and dancers and actors, oh my! The Seventh Annual Pace University Celebration of People with Disabilities in Film took place on Thursday, April 4th, featuring creative expressions from people of all ability levels combined with interesting discussions on the disability experience from parents, professionals, and more. More than 200 people attended to view films that were presented by the Sprout Film Festival, Pace University, and the NYU Tandon School of Engineering.

Assemblymember Angelo Santabarbara attended with his son, Michael, who is on the autism spectrum. Following the film “JMAXX and the Universal Language,” which featured a dancer with autism who busts out his moves anywhere in public, the legislator from Schenectady remarked how difficult it can be to have a loved one with a visible disability. “It’s not spoken but you can tell people look,” he said. “I like to try and let Michael do things on his own. As he’s gotten older I will keep my distance and let him go but I notice that people will talk about him. As a parent, you have to assume he won’t be treated fairly.”

Betsy Lynam, AHRC New York City’s Chief Program Officer, said that many of the films centered on the themes of “providing choice” and “learning from the unlikely person.” Betsy later said that the films required people without disabilities to self-reflect. “We are in the middle of a social justice movement; we have to look in the mirror and see how we have to change,” she said.

In addition to “JMAXX,” the films screened this year included “Kill Off,” “Still Sophie,” “Fighter,” “Aretha,” “Surreality,” and “Being Seen.” At the beginning of the event, several organizations were invited to set up tables and provide information to guests, including AHRC NYC’s Melissa Riggio Higher Education Program. As in past years, the event was hosted by longtime AHRC NYC community partner, Dr. James Lawler.

In His Own Words: James Downey

James Downey, a self-advocate receiving services from AHRC NYC’s Stephen B. Siegel Day Center in Brooklyn, provided his reflections on the evening’s films and discussions:

Last night, Janice and I went out to dinner, and after that, we went out to Pace University. It was nice; I met a lot of people. I met Victor Calise, the disability commissioner from City Hall. He works with Bill De Blasio, the Mayor of New York.  I spoke to [Assemblyman] Angelo Santabarbara from Albany, New York.

We talked about doing the right things: sharing and caring. I spoke about our future, our life, and how to support people who support us. We saw a short film, it was nice. A man was dancing, he did a hip–hop thing. He danced to Aretha Franklin, Queen of Soul, after she died. I loved [panelist] Tabitha Haley; she’s a singer and an advocate. She sang a lot of songs at Pace University. She sings very nicely, she has a very good voice. I was so happy to be there, and I am planning to attend next year. 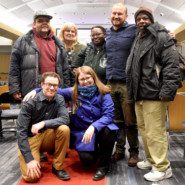 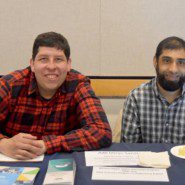 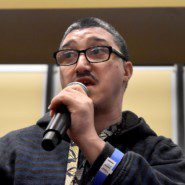 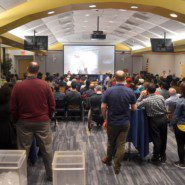 March is National Developmental Disabilities Awareness Month and for six consecutive years, Pace University has celebrated the occasion with a film festival recognizing the achievements of people with disabilities in film. Held on Tuesday, March 20th, the evening showcased a series of short documentaries with a panel of experts dissecting the themes of each film following its screening. James P. Lawler, DPS, Professor of Disability Studies and Information Technology at Pace University served as the Chair of the festival. 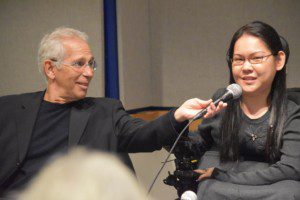 A few of the screened films centered on people with disabilities finding their way through romance: Love and Independence in East Providence, Can I Call You? and When Essie Met Ernest. Tabitha Haly, Vice President at JPMorgan Chase and a self-advocate, said that she had previously been featured in a New York Times article profiling the struggles people with disabilities have in the dating world. She encouraged everyone to be open-minded and to realize that “love is beyond any type of discrimination.”

Following the screening of Love and Independence, which profiled a couple who met at a sheltered workshop in Rhode Island, NYU Senior Lecturer, and sibling, Allan Goldstein said that the film had a universal message. “We all want work and love,” he said. 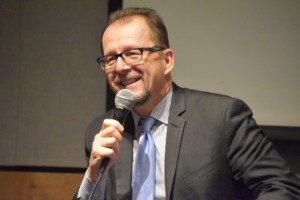 Marco Damiani, CEO of AHRC New York City, applauded Rhode Island’s initiatives to integrate those who used to work in sheltered workshops, saying “Change doesn’t happen easily, but when it does happen it makes a difference.”

When Essie Met Ernest, a film created by an NYU student, told the story of longtime love between two New York City residents. The movie’s male namesake, Ernest, was in attendance at the festival. Marco said that he worked for UCP of NYC (now ADAPT Community Network) in 1989 when Ernest was married, and an audience member added that she was present during Essie and Ernest’s wedding ceremony.

Adil Sanai used his AAC device to express his views about the films and questions to the panel. He highlighted Academy Awards Best Picture winner The Shape of Water as a mainstream movie that positively featured characters with disabilities.

Other films showcased people with disabilities telling their personal stories in their own words. In What I Like About Myself, a variety of people shared some surprising responses to that inquiry. “We learn things about ourselves when others see things that we don’t see,” Marco said following that film.

Humans of San Jose, Jonathan, and Discovering the Truth with Tanner DeMita featured short profiles of young men with disabilities. Following these screenings, Tabitha talked about the challenges she encountered when she began to self-identify as a person with a disability and then realized that she needed to help others do the same by becoming a self-advocate.

Marijo Russell O’Grady closed the festival by asking the panel about how to continue to improve the lives of people with disabilities.  In response, Allan Goldstein said, “When you see discrimination, say something about it.” 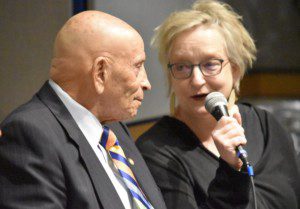 Maria Hodermarska thanks Harvey Weisenberg for his decades of advocacy inside and outside of the New York State Assembly.

Maria Hodermarska, Drama Therapy Teacher at NYU and a parent of a person with a disability suggested that improvements can be made by, “Making community, making relationships, and paying more attention to each other.”

“We’re better together, stronger together,” said Marco. “These people do not allow themselves to be defined by their disability. All diversity is good. It’s how we manage diversity to make it better for all of us that is a challenge.”

Summer in the Forest

There have been a number of opportunities for New Yorkers to view films about and by people with disabilities in recent months, made available to audiences through entities that champion their stories, such as ReelAbilities Film Festival New York.

Moviegoers might find the new documentary film, Summer in the Forest of particular interest. The film is focused on the story of L’Arche, a commune for people with disabilities, located at the edge of a beautiful forest near Paris. The film explores the stories of the commune’s residents, who faced difficult challenges in their early lives when they were locked away in asylums, but who today have the opportunity to make the most of their lives.

You can read more about this event in an article posted on the Pace University website.

For the fifth consecutive year, the Pace University Film Festival Marathon celebrating people with disabilities on the silver screen featured inspiring stories, thoughtful discussion, and plenty of laughs and tears. Six short films both narratives and documentaries were presented, with each followed by a discussion from a distinguished panel of people with disabilities, experts in the field, and family members. The event was organized by Dr. James Lawler, Professor of Disability Studies and Information Technologies at Pace’s Seidenberg School.

The panel discussion opened up with a question about how Hollywood is or is not improving in its portrayals of and the hiring of actors with disabilities. Gary Lind, Executive Director, AHRC New York City, remarked that while the film industry itself has much work to do, social media and the increase in independent film-making technology has made it easier than ever for those with disabilities to create and star in their own creative endeavors. Positive remarks were also made about Julia, the new Sesame Street character who has autism. 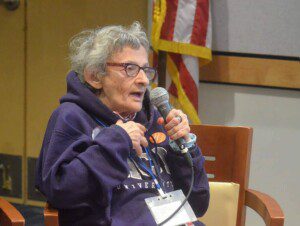 Following Stutter, parent and NYU lecturer Maria Hodermarska observed that many famous actors, such as James Earl Jones, stammered in their youth and used acting as a therapeutic tool. Bullying was a common theme in the short film, and third-grader Greta Baier said that the onus is on parents to reinforce that bullying behavior is unacceptable. “Parents should tell their kids that even if someone’s different they should still treat them the way you want to be treated.”

Self-advocate Gilda Lindenblatt, who lives in an AHRC NYC residence and attends Walter and Evelyn Redfield Day Services, said that she was motivated by Dancing on Wheels. “I was looking at [the movie] and the way she moved on that wheelchair, it was really amazing. She wanted to be like all other people and the way she did it, she was talented as a disabled person. That’s how it is-if they can manage to do it and have the talent, then it’s well worth it.”

Pace University also used the occasion to thank many AHRC NYC employees for a decade of close community partnership. The staff members thanked are listed below by department: 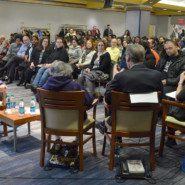 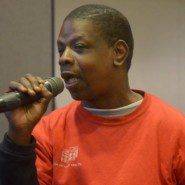 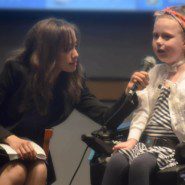 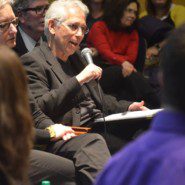