“Gratitude is not only the greatest of virtues but the parent of all others.”

AHRC New York City expressed its gratitude to hundreds of staff members celebrating longevity milestones and continuous excellence in their daily work with its first annual Staff Recognition Day, held on Friday, January 17 at Pier Sixty at Chelsea Piers. The day included the presentation of awards, inspiring speeches, and music and dancing to cap off the event in style.

“This is a signature event where we can recognize staff throughout the agency for their exemplary service,” said Marilyn Jaffe Ruiz, an AHRC NYC Board Member who chairs the Committee on Diversity and Personnel Practices. 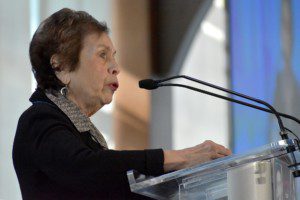 “You are the professionals who every day in your work demonstrate the humanity, compassion, and commitment to social justice necessary to respect the difference between and among people w/ I/DD and their families.”

“I know for many decades we’ve respected and honored the work you do every day, but this is new,” Marco Damiani, CEO of AHRC NYC, said. “This is a way to gather hundreds of people together–many of them here for 30, 35, even 40 years–and really showcase the amazing workforce that we have. “Today we celebrate milestone anniversaries, your commitment to excellence, your commitment to continuous learning and self-improvement, and your central role in promoting social justice for people with I/DD.”

Several of the staff who were honored during the event provided testimony on their experiences working at AHRC NYC.

“What keeps me here is that every day I get to engage with the people we support on big-life issues,” said Craig Becker, Associate Director of Residential Services, who celebrated 25 years with AHRC NYC.

“It feels good to be recognized,” said Lizadro Mejia, 34, who has worked in the mailroom at AHRC NYC’s Headquarters for five years. “I didn’t see it coming.” He takes pride in traveling independently and delivering packages and mail to different programs. “The best part of my job is being able to help people,” he said. Lizandro wants to continue to work in the mailroom and become even more independent. “My biggest goal is to get my own place,” he said.

Lizandro’s mother, Clarisa, was thrilled to see her son so happy. “When you work somewhere and you’re recognized, it means a lot and it feels really good,” she said.

Alex Oo, a Direct Support Professional for 10 years at Kings Highway Day Services, celebrated 15 years with AHRC NYC. “I love the people I support,” he said. “I treat and see them as my family.” With a bachelor’s degree in botany, Alex spearheaded a community garden. “It was a chance to show off my knowledge and what the people we support can do for the community,” he explained. Alex has helped develop a hydroponic garden, which uses no soil, but instead grows plants in water and nutrients. The garden is also organic, as no chemicals are used. When the crop of eggplants, tomatoes, cucumbers basil, and fruit are ready, the people at Kings Highway distribute the food to the local fire department, homeless shelter, and to the people working at and attending the day program.

“I feel good,” said Kevin Brown, who couldn’t contain a huge smile when he was acknowledged for his 30 years as a messenger with AHRC NYC. “I’m proud.” 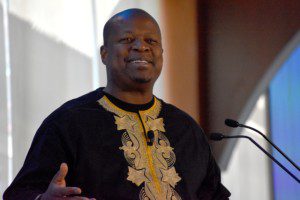 Lou Radja, a renowned public speaker who previously addressed AHRC NYC’s first Leadership Summit, said that “Gratitude is at the foundation of everything we do. My father once told me ‘When you take the elevator to the top, send it back down for someone else.’ Every person here is committed to sending the elevator back down for those who need it the most.” 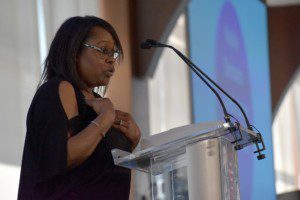 Nyoka Simmons, Management Systems Coordinator with Residential Services, was recognized as the Valedictorian for staff members celebrating 5, 10, and 15-year longevity milestones. “Fifteen years ago I interviewed with Michael Weinberg for an assistant manager position,” Nyoka said. “Even though my only previous experience was managing an animal shelter, he took a chance on me. He noted that you have to look beyond the experience in the field and see the passion, the capability, and the potential in people. That has always stuck with me and that is what we are all about. If a window of opportunity appears, don’t pull down the shade.”

“What started as a step to save and help myself has turned into helping others, has given me meaning, and has turned into my family,” said Belma Dautovic, Borough Director for Employment and Business Services – Queens, who was honored as the Valedictorian for staff members celebrating 20-years-and-above milestones. “To me, AHRC stands for welcoming those that otherwise may not have opportunities elsewhere. I came to NYC from Bosnia over 20 years ago as a refugee. AHRC valued my work, my commitment, and me as a person. AHRC stands for appreciating each and every person for what they are as human beings, and helping each person become the best version of themselves.” 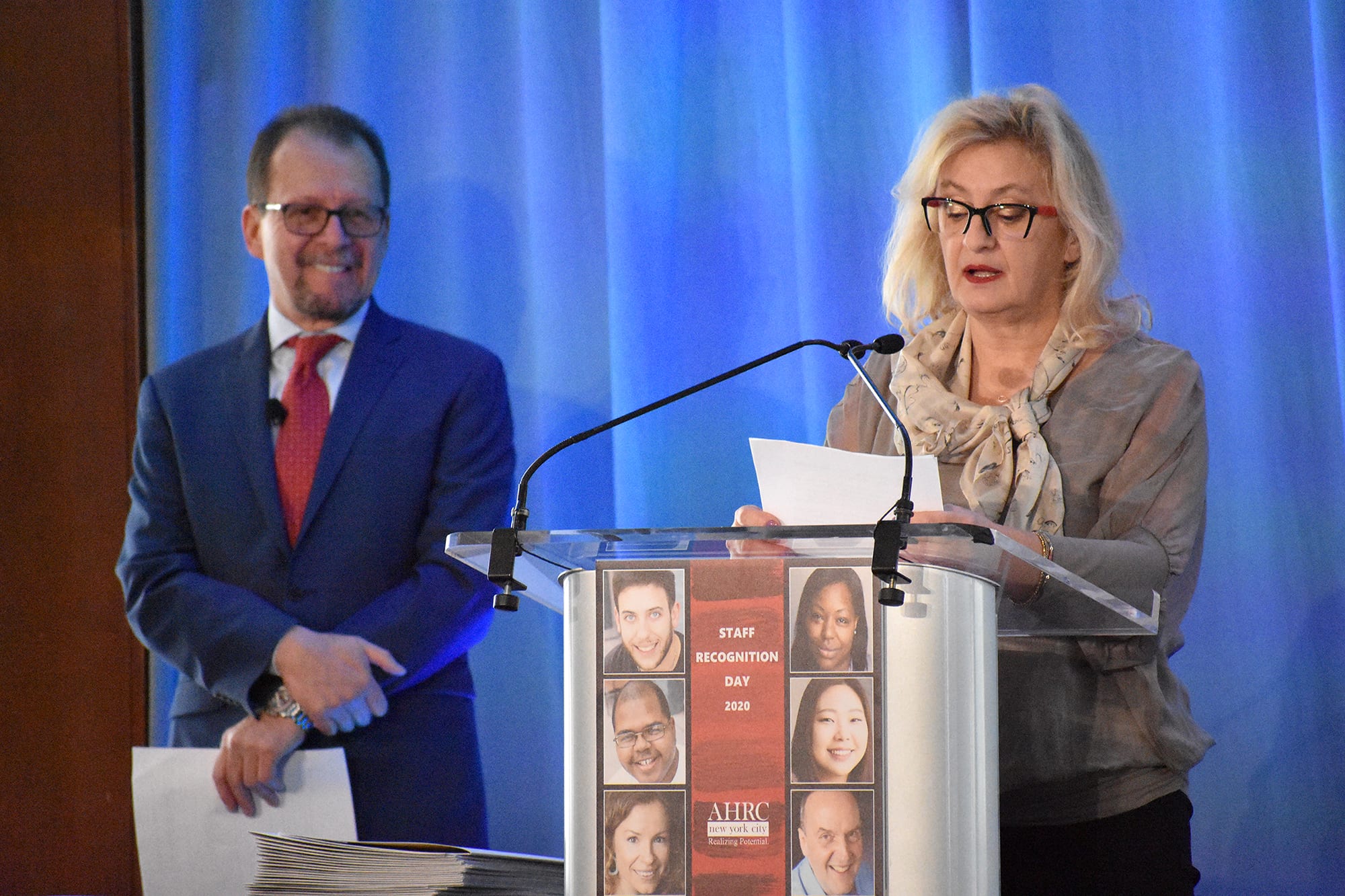 Belma Dautovic was the valedictorian for staff members observing 20 years and above longevity milestones.

AHRC NYC Board Members sponsored a number of Service Excellence Awards, given to staff members who have exemplified our mission at all levels of the organization. 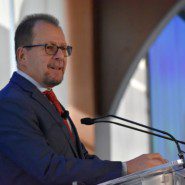 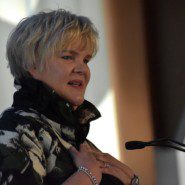 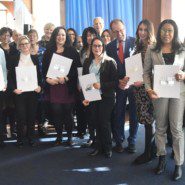 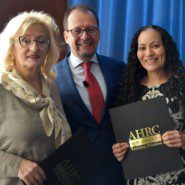 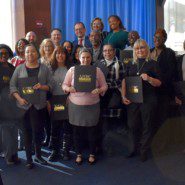 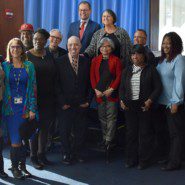 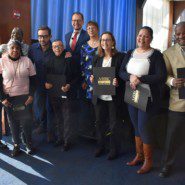 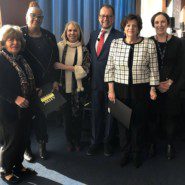 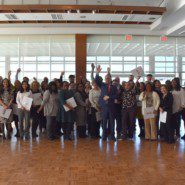 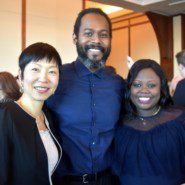 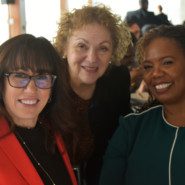 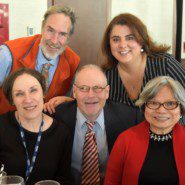 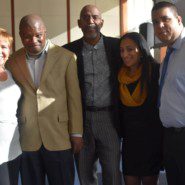 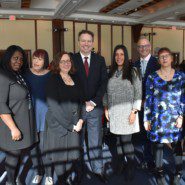