The Jay Street-MetroTech subway station in downtown Brooklyn has a new look thanks to a focus on improving accessibility. The station, which serves riders on the A, C, F, and R lines, is the hub for MTA New York City Transit’s (NYCT) Accessible Station Lab, an initiative designed to test out physical features and technological integration that may improve commutes for travelers of all abilities.

“Anything that’s looking new or unexpected, that’s probably part of the Accessible Station,” said Mira Philipson, Systemwide Accessibility Analyst for the MTA/NYCT, during one of several tours of the station that people from AHRC New York City took part in. “We’re working to improve accessibility across the subway and buses.”

The physical aspects of the station lab are in place to assist people with visual impairment as well as people with cognitive challenges. Tactile guideways can help visually-impaired people using long canes make their way through the station and guide them to the nearest elevator. Color-coded tape on the floor of the station—yellow for the R train, blue for the A/C lines, and orange for the F train—directs travelers to the area of the station where they need to catch their train. People with vision challenges are also assisted by bright yellow, hard-plastic stair warnings. Many of the subway signs are larger and use Braille.

During tours of the station, Mira and her MTA/NYCT colleagues Sara Bahri and Annika Haider guided self-advocates and staff members, pointed out the features of the accessible lab, and demonstrated how to use the smartphone apps associated with the lab. These apps include:

Another application that has partnered with the MTA/NYCT is MagnusCards. This app creates custom step-by-step guides for people with cognitive needs so that they can access a wide variety of services and experiences, such as museum tours, daily hygiene, and, of course, getting from place to place using public transportation. The MTA worked with Magnusmode (the app’s parent company) to create a unique guide for the Jay Street accessible station lab. The app’s founder and CEO, Nadia Hamilton, joined AHRC NYC on a tour of the station in December 2019 and proudly demonstrated MagnusCards’ features. 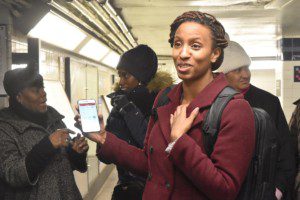 Nadia Hamilton is the founder and CEO of the MagnusCards app, which creates step-by-step guides for people with cognitive challenges to follow along with for a variety of experiences.

“I was inspired by my brother Troy, who is on the autism spectrum,” Nadia said. When they were growing up in Toronto, Nadia used to draw diagrams to assist Troy in getting through his daily activities; in a world with smartphones, this eventually evolved into MagnusCards, “bridging the gap from the couch to the community,” in Nadia’s words.

Charles Umaña, the Technology Deployment Specialist/Trainer, said that the MangusCards app could be featured at AHRC NYC’s monthly technology group meetings and then applied further during trips into the community. “I think the app can get the most exposure by using it in activities that the people we support are specifically interested in,” he said, citing money management as a key source of enthusiasm.

Positive Feedback, but More to be Done

Richardson Saintpierre, Travel Instruction Coordinator, and Matt Estep both said that the feedback they received from self-advocates was positive. “I do believe that it could be a future model for subways in the future,” Richardson said. “I think further accommodations can be made for people with visual impairments.” Matt added that he found the “low-tech” additions such as the color-coded tape to be the most practical, especially as many people with disabilities encounter poverty and may not be able to access the technology required to use the apps.

The accessible station lab features will be at Jay Street-Metrotech through the early portion of 2020, according to MTA/NYCT. The agency is seeking feedback from people who have toured the lab’s features; click here to provide your thoughts.

To get a different perspective on the station lab tours, visit AHRC NYC’s Instagram page and click on the Story Highlight entitled “Station Tour.” 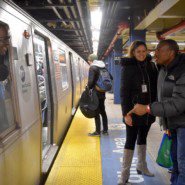 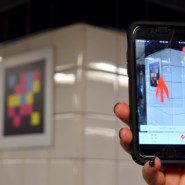 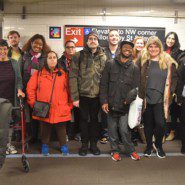