The Art of Hispanic Heritage, with Jayson Valles

Jayson Valles’ Hispanic heritage is ever-present in his art, which he has been creating for nearly all of his 37 years living in Puerto Rico and the Bronx. He has continued to flourish as one of the founding members of ArTech at the Howie Stone Adult Day Center, which provides opportunities for artists to develop and express themselves creatively through inclusive, innovative, and accessible approaches to traditional and new media.

“I call my paintings and drawings the artistry of my life,” Jayson said. “I do other things, like singing and acting, but even when I am doing those my [visual] art is my top priority.” 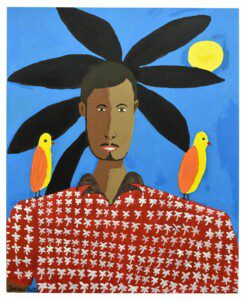 “A Portrait of Myself Relaxing in Paradise” by Jayson Valles

Jayson has been creating art since he was five years old. “I started with tracing, drawing and then later coloring with crayons,” he explained. “When I was a teenager, I began to paint portraits. I moved on to colored pencils and markers, and when I was 21, I started doing paintings on a canvas.”

Jayson’s signature style infuses the colorful warmth of tropical scenes with the diverse landscapes afforded by New York City’s many neighborhoods. His paintings are heavily layered with paint and every little bit of the canvas is treated with attention to detail. Pola Ana-Mora, the Program Supervisor at ArTech, has worked with Jayson for several years, seeing his style evolve and improve.

“Jayson often takes pieces of his culture and inserts them into his drawings,” Pola explained. “Over the years Jayson has created countless beach scenes and portraits of people he imagines from Puerto Rico. Most recently he created a beautiful portrait of a “Congo man” on the beach. Even in his landscapes of NYC, he finds ways to incorporate his heritage. For example, he has a drawing of the Brooklyn bridge with a Puerto Rican flag projected behind it, like the Batman spotlight.”

Representing his geographical origins and Hispanic heritage is important to Jayson. “I love painting beaches and palm trees and sun and everything. Dolphins, crabs, anything that’s going on at the beach, fishes, and all that. Sometimes I paint the picture of a city too as well, like buildings and bridges.”

His art is continually inspired by famous artists of Hispanic origin such as Pablo Picasso, Diego Rivera, and his favorite, Frida Kahlo. Jayson’s goal is to carry on their legacy and to one day be featured in an international exhibition so he can further represent his family, his island, and his borough.

“I live in the Bronx and I live around a lot of Hispanic people,” Jayson said with pride. “They speak Spanish like me—Spanish is my language. I’m proud to be Hispanic and Puerto Rican.”

You can see Jayson’s art and the creations of his ArTech colleagues on the collectives’ Instagram page and their website. 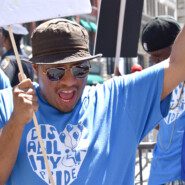 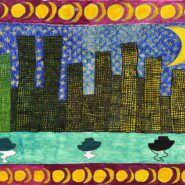 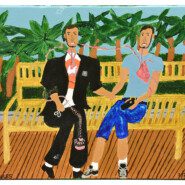