A group of students with Project SEARCH became first-time gardeners while attending AHRC NYC’s Sprouts of Joy virtual gardening project. The project, hosted by HSBC community partners, provided students an opportunity to learn the importance of gardens, while planting indoor vegetable gardens for their homes or classrooms.

“It was so great for the students,” said Lisa Arbisi, a teacher partnered with Project SEARCH and working at a District 75 school in Queens. “Nobody has had that experience before,” she said.

Daniel Bosco, one of her students, enjoyed painting his planter box, as well as planting seeds. “It taught us to have green thumb and interact with plants,” said Daniel, who along with other students opted to leave their gardens in the classroom rather than transport them home on a subway or bus. Carrots, green beans and radishes have sprouted.

Darinka Vlahek, AHRC NYC’s Director of Arts and Community Outreach, has often shared her passion for art and gardening with people from AHRC NYC programs, including students from the Melissa Riggio Higher Education Program at the College of Staten Island (CSI), AHRC Middle/High School, as well as Project SEARCH.

“Gardens don’t have to be outside,” Darinka said. “You can have an indoor garden with one pot.”

Anthony Tripodi, a Melissa Riggio Program student at CSI, was looking forward to seeing his plants grow. “I want to plant these seeds to make the world a more beautiful place,” he said.

“This is very relaxing,” added Jordan Campbell, one of Anthony’s classmates from the Melissa Riggio Program.

Karen Zuckerman, AHRC NYC’s Director of Community Partner Engagement, said she was pleased to partner with HSBC Bank for the event. HSBC has been a valued partner of AHRC NYC since 2019, providing community partnership opportunities for the bank’s employees that enrich the lives of people supported by AHRC NYC programs.

“Not only was this event fun, but it also was educational as students learned how to plant seeds and watch them grow into vegetables for healthy eating,” Karen said. 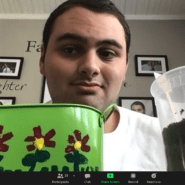 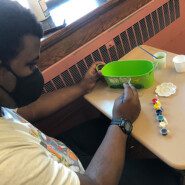 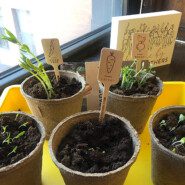