Good boys Dulles and Simmy bring smiles to the faces of people we support each Tuesday as part of a virtual pet therapy class organized by AHRC New York City’s Community Partners. The two dogs and their respective parents, Janna Zuckerman and Stu Hindman with Dulles and Caroline Seidner with Simmy, provide a half-hour of levity, charm, and education to people with disabilities that may not have pets of their own.

“I actually had created the pet therapy group with Norfolk prior to the pandemic with a community partner and her dog who was named Little One,” said Karen Zuckerman, Director of Community Partner Engagement.  “Unfortunately she stopped coming so I asked a friend of mine, Caroline, if she would be interested in bringing her dog instead.”

The two friends agreed to continue the group virtually when the pandemic suspended in-person activities. Janna, who is Karen’s daughter, has Dulles join the pet therapy sessions on days when Simmy and Caroline are unavailable.

Dulles and Simmy are opposites in some ways. Dulles, a Golden Retriever/Miniature Poodle mix (aka a Goldendoodle), is still a puppy at just seven months old. His birthday is August 25th. Dulles is rambunctious, learning commands well, and has a bottomless stomach.

“I had never had a dog before Dulles,” Janna told the group. “Stu had many dogs growing up. This is our first pet together.”

Connie Chan from Norfolk Day Habilitation was curious if Dulles enjoys being around people he does not know. Janna explained that like many Golden Retrievers, Dulles is social with both people and other dogs, making them excellent family pets.

“Can he go out by himself then?” Connie asked.

“Sometimes we leave our door open that leads to our outside area, but he can’t go very far,” Janna said. “We keep him on a leash when we go for a walk.”

Dulles has been spoiled as an addition to the family made during the pandemic. “He’s going to be in for a rude awakening when we need to go back to work,” Janna said. “The few times we have left him he’s been ok. He seems to just sleep a lot. He doesn’t like it, but he’ll get used to it.”

Whereas Dulles is still working out his youthful kinks, Simmy is providing joy in the later years of his life and giving the people we support a pet to relate to. He is a 15-year-old black-and-white purebred poodle. Simmy was tragically abused as a puppy, resulting in lifelong disability after a violent incident caused a broken hip. His leg cannot fully go under his body when he sits, and he limps when walking.

Caroline is no stranger to dogs, once having three poodles at one time, making her the perfect person to be Simmy’s trusted companion. Caroline rescued Simmy from an animal shelter. She sees the inherent good in each dog.

“Even with disabilities, dogs can be happy,” Caroline told the group. “They care more about their human than themselves.”

Simmy is already deaf and beginning to suffer visual impairments, as well. He is, however, still capable of providing great affection towards Caroline and “eats like a pig.” Each week, Caroline shows the group the most important lesson of responsible, conscientious pet ownership.

“You need to be loyal to them and they will be loyal to you,” she explained. “That’s why they are man’s best friend.” 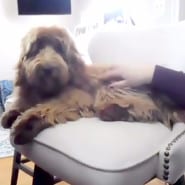 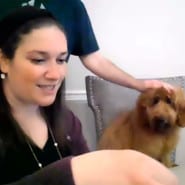 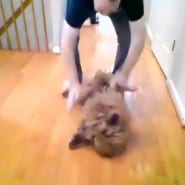 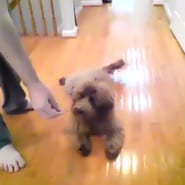