Willie Mae Goodman won’t tell you what her job title is. “I’m a mother and a parent–that’s my title,” she says emphatically. With a soft southern drawl that belies a fiery passion, Ms. Goodman has been an advocate for people with disabilities for decades. On May 16, at AHRC New York City’s Annual Dinner, Ms. Goodman will be receiving the Anne Kraus Award.

A Legacy of Advocacy

Ms. Goodman was born on May 11, 1931 in Durham, North Carolina. She came to New York City when she was 21 years old. “I loved ballroom dancing and the jitterbug,” she remembers fondly. “I wanted to go to dancing school up here.” 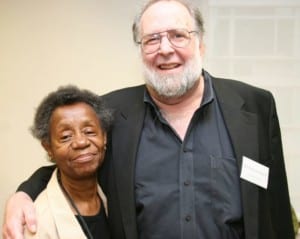 A year later, on October 26, 1955, her daughter Margaret Theo Goodman was born. But at four months, Margaret began experiencing seizures. Ms. Goodman took her daughter to a medical center where she was told that her daughter would be permanently disabled. Four years later, on the advice of a doctor, Ms. Goodman moved her daughter into the Willowbrook State School in Staten Island. “The doctor told us that they could teach Margaret to walk or talk,” she says. “We agreed to let her go. I said to myself that if they taught her to do one of the two I would take her back home. She didn’t do either one though.”

In 1965, Robert F. Kennedy, then one of New York’s senators, visited Willowbrook and declared “it wasn’t fit for animals to live in,” in Ms. Goodman’s words. Margaret and approximately 200 other individuals with multiple disabilities were moved out of the facility and into Gouverneur Hospital at 621 Water St. in Lower Manhattan.

“The state expected them to die because of their medical problems and they hadn’t been receiving the very best medical care,” Ms. Goodman says. “But our individuals did not die because the direct care workers did what they could do to care of them. They had no training but they had the love and the patience and the understanding, but most of all they had a gift from God.”

By 1970 New York State declared it had a budget crisis and that Gouverneur Hospital would be closing. Goodman, along with community organizations such as Two Bridges and Henry Street Settlement and famed New York politicians such as Miriam Friedlander, Roy Goodman, and Percy Sutton, rallied against the state’s position and forced them to come up with a better solution than sending Margaret and many others back to Willowbrook. They succeeded, having them moved to Flower and Fifth Avenue Hospital. This period was a formative time in Ms. Goodman’s life.

“We as parents, along with others, fought for our children to live a fruitful life,” she says. “And we have always resented the mindset that people like my baby should die and not live, that they don’t deserve a right to live. Even today, children with disabilities have been the last to be thought of but the first to be tossed aside. But the parents of yesterday and today have always said our children are to be thought of but never tossed aside.” 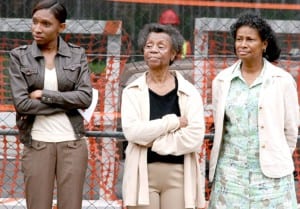 Margaret now lives in a group home on 119th St. in Manhattan with 24 other individuals and has been there for over 20 years. Ms. Goodman says that she visits Margaret every Sunday, and takes her home four times per year. But while her own daughter is in a safe, comfortable environment now, Ms. Goodman still works tirelessly for the rights of others with disabilities. “Many years ago, I went to visit a person I represent who was in a nursing home,” she says. “And it was bad, something I don’t want to see anymore.” This spurred her to contact OPWDD and become a driving force behind the development of AHRC NYC’s Dickson-Goodman Apartments, which houses people with 24/7 nursing needs. Ms. Goodman was supported in this endeavor by Marie Dickson, a member of Community Board 11, which was essential to helping bring the facility to Harlem. “Without Ms. Dickson, we wouldn’t have been able to build that site,” Ms. Goodman says. Ms. Dickson will be posthumously honored at the Annual Dinner as well.

A Message for the Future

Ms. Goodman continues to advocate for people with disabilities as part of the Gouverneur Parents Association, and despite the immense progress she has helped spur, there is still more work to be done. “My fear now is that we are going backward instead of forwards,” she explains. “Services have decreased-people are waiting months to have their wheelchairs repaired. We aren’t providing enough to staff to give good services. There is no integration in the community in a normal fashion. They have chopped the system in so many ways that people just don’t know where they’re going. Communication is not the same the way it was 40 years ago,” she says.

Through her decades of advocacy work and being a parent of a person with developmental disabilities, Ms. Goodman is a fountain of wisdom. “My message to parents is that we must and we should organize and join together for the benefit of our kids to make sure they get the services they deserve and need,” she implores. And for the younger generation, she gives an important and beautiful piece of advice. “When you’re out speaking, say what you have to say in any way you have to say it and know why you’re there. You’re there to speak out for those who often cannot speak for themselves. Never think of yourself–think of them first.“