“I want to take a time machine trip to a place called Lookout Mountain, Tennessee.” Natale Miceli, with his close friend Martin Neal by his side and the soulful strains of Sam Cooke playing behind them, was preparing to take his audience back to the future, recreating an old-time radio feel in a contemporary audio format.

With support from staff members at Walter and Evelyn Redfield Center, the podcast WKRTM features golden oldies, classic radio commercials, and engaging interviews. It is available to listen to on Soundcloud.

“It started with staff sitting at a table listening to music with Natale pretending it was a radio show,” Maria-Mercedes Hubbard, Community Support Supervisor, said. “It quickly grew to 20-30 people sitting in front of a Bluetooth speaker enjoying the time together.”

Charles Umaña, Abigail Morrison, and Maria Hubbard assist with the recording and editing of WKRTM

The idea for a podcast—the listen-on-demand style of audio that has exploded in popularity over the past decade—came soon after. “We started watching YouTube videos and learned a lot about equipment and creating a format, and we went to B&H to explore the equipment,” Maria-Mercedes said.

Charles Umaña, Technology Deployment Specialist/Trainer, was brought in to assist with getting the podcast off the ground. “I’ve had previous experience with creating a podcast so I was happy to assist,” he said. “My role has been tied to providing the appropriate technology to benefit the podcast and to assist with set-up.” Charles also created a how-to guide for staff members, such as Community Support Professionals Abigail Morrison and Mohammed El-Hadad, to explain the process of recording and editing.

“It’s all kind of new to me,” Abigail said after she finished recording the most recent podcast, “Sounds of the ’60s.” “Everything has been a good experience for me but this is very inspiring. The guys give me directions and I’m happy to follow them.”

For Natale and Martin, radio and music have been lifelong passions. 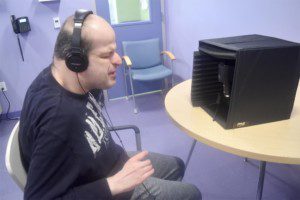 “I discovered music listening to top-40 AM radio when I was a kid,” Natale said. “I used to like WABC; my favorite DJs were Harry Harrison, Ron Lundy, Dan Ingram, and Cousin Brucie.”

“I tuned into CBS-FM early on,” Martin added. “When WABC was losing people, I started listening to CBS because I noticed they were playing ‘50s, ‘60s, and ‘70s music. I was born in the ‘60s and I didn’t know too much about oldies. The music got to me, I got so groovy.”

WKRTM—which uses the two traditional radio station call letters and an abbreviation of “Redfield Time Machine”—showcases many oldies songs that won’t be heard on most commercial radio stations in 2018. Natale’s encyclopedic knowledge of the ‘50s and ‘60s pop hits (and some B-sides) and the radio stations they played on across the country lend an antique feel to the podcast. Additionally, Martin’s skills as an interviewer have been on full display, especially during his conversation with AHRC NYC Chief Executive Officer, Marco Damiani.

“When I ask questions I get to know things about people and their lives and what kind of work they do,” Martin said. “When I interviewed the Broadway people, I got to learn more about their music.” Martin and Natale feel it’s important to showcase the music of their youth. “We grew up with these songs; today’s generation doesn’t know anything about it,” Martin said.