AHRC New York City provides University Internship Opportunities for college students seeking course credit and for people who are preparing for graduate school. The goal of our Internship Program is to attract talented, dedicated professionals to the field by providing educationally-sound placements so that students are introduced to the challenges faced by people with developmental disabilities, guidance and supervision from professionals who are certified to provide field instruction.

On Friday, April 21st, 2017, Social Work Interns gathered on the penthouse floor of AHRC New York City Headquarters to attend a luncheon held in their honor.  Each intern received a personalized thank you letter and small gifts of appreciation.

AHRC NYC’s Executive Director, Gary Lind, who began his career as a Social Worker, welcomed guests to the luncheon.  “[As Social Workers], whether we’re doing individual work with people, or we’re doing policy work, or we’re doing community organizing, we are about being agents of social change,” said Mr. Lind. “The work you’re doing, and what you contribute to the people you’ve been interacting with, it means so much to us.” 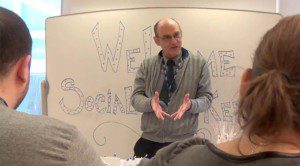 “I really can’t tell you how proud I am of my interns,” said Dr. Raymond Franzem, AHRC NYC’s Director of Internships, addressing attendees.  “When people say to me, ‘Do you ever think about retiring?’ I say ‘I love it!’ Who else gets a chance to talk with all of you? I get to sit down and talk with you, and no matter how much I have to do when I get home, I always say, ‘I had a good day.’ And I had a good day because you’re good people, and I see what you have done. And when I hear the stories that come back to me, when I see the smiles on people’s faces when you work with them… it just makes me so happy and so proud to be a part of this. And I hope you continue your relationship with AHRC going forward.”

Dr. Franzem also thanked Brenda Weiss, who has supervised all of the Residential Interns for the past 11 years, and Charlotte Diaz, Facility Director for AHRC NYC’s Howie Stone Day Services, which has taken on more interns than any other program in the organization. “Without these two people,” he said, “we really wouldn’t be able to do what we do.” 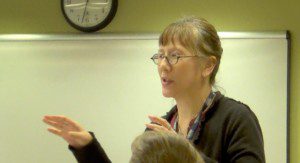 “As an agency that year in year out has struggled with a lot of budgeting constraints, having interns and volunteers is a critical and integral part of our resourcing and our ability to provide optimal services to the people that we support,” said Sharon Fong, AHRC NYC’s Director, Organizational and Employee Development. “We thank you very much for your participation, and I really do hope that you will consider maintaining some sort of relationship with us, with the people that you met here… because we think of ourselves as a caring community, and we want to keep everyone in that community for as long as we can.”

Kelly Zepf spent her internship at the Manhattan offices for AHRC NYC’s Employment and Business Services. “I’ve been counseling and working with different individuals that have jobs or are working to get jobs,” she said. “We work on [their] job skills, social cues, and techniques to improve their work. For people who are trying to get jobs, we work on interviews, applying for jobs, resumes, cover letters, everything needed to get a job.” 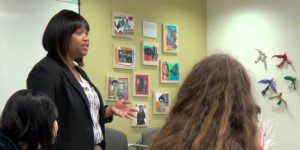 Marie Delsoin interned at AHRC NYC’s Betty Pendler Day Services, and Stephen B. Siegel Day Center, using drama therapy to support people receiving services at Day Services programs. “The drama therapy has been very helpful. It helps the people we support to engage [with others],” she said. “We do a lot of games based on memory, to help them with their short-term memory. They are having fun with it, and I love it because I’m learning from them. And I really admire doing this work.” 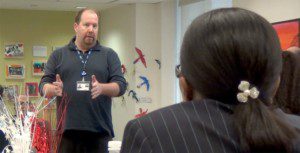 Gerard Lovett spent his internship working at AHRC NYC’s Agovino and Wilson residences in the Bronx, and describes his role as being a “jack of all trades.” “I don’t have a social work background, or a background working with this population, so I wanted to learn, as well as help,” said Gerard. “I’ve gotten to know residents, learning what their needs are, seeing if there’re any issues they wanted to discuss.” Gerard is currently organizing a fundraiser to benefit Direct Support Professionals with an appreciation event.  “I’m a musician, so I’ve tried to implement music therapy. I am happy to say that recently at Wilson [residence], I interviewed a resident who was retired.  He mentioned to me that he learned to play the piano when he was younger, so I asked him if he wanted to get a small keyboard that he could play. I talked to the Manager, and a week later, he had a keyboard, and it was great!  I set it up for him and he played it, and it’s been a wonderful experience.”

Although social work interns’ careers might take them in a number of professional directions, their experiences from AHRC NYC will stay with them. We are proud to celebrate their work, and welcome the opportunity to continue working with them in the future.