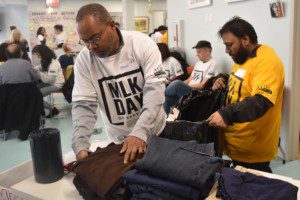 At Joseph T. Weingold Day Services, volunteers from New York Cares organized clothing that was to be distributed to people in need.

“I came to help out people who really need it,” said David Guaman, a self-advocate, who volunteered at Joseph T. Weingold Day Center in Elmhurst, Queens. “I love to help out because it makes me a better person.”

In addition to the Elmhurst site, volunteers gathered at Norfolk Day Services on Manhattan’s Lower East Side; Wendy M. Siegel Day Services in Bushwick, Brooklyn; and at PS241 in Crown Heights, Brooklyn. These neighborhoods are notable for their rapidly shifting demographics and high levels of food insecurity and income inequality.

Making the World a Better Place

Bonnie Astor, an Art Consultant with AHRC NYC, coordinated art activities for children and adults from the community. “One of our art activities today is building a community wall,” said Bonnie. “Everyone can post a wish or an action they want to make their community and the world a better place.”

Some of the multi-colored Post-Its carried messages inspired by Dr. King, such as: 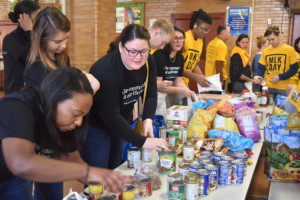 Avril Haines used to work in the national security sector, including being the first female Deputy Director of the CIA, before becoming a Commissioner with the National Commission on Military, National, and Public Service. She volunteered with her husband at PS241 in Crown Heights, preparing packages of food to be donated to local shelters and pantries.

“All of the commissioners go out to do public service on MLK Day, as our staff picks a place for us to go in the region where we work,” Avril said. “This is my first time doing anything with AHRC NYC. It’s wonderful to see what is happening here today with everybody coming together for this day of service.”

In Elmhurst, Giovanni Richardson was among a group of volunteers from IBM, which had a widespread service initiative for MLK Day. “Today was very fulfilling. It’s always good to give back your time and your energy whenever you can,” Giovanni said.

Brooklyn-based self-advocate Elyssa Zeller summed up the day’s purpose. “I came out here today to support MLK,” Elyssa said. “He did so much for us. Without him, we would not have the freedom to speak for our rights and the freedom of others.” 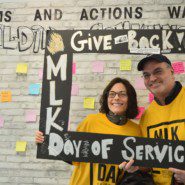 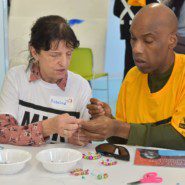 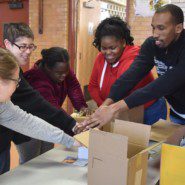 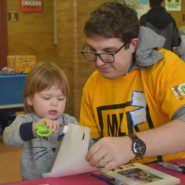