On Friday, April 23, right on the heels of Earth Day, people from AHRC New York City’s Staten Island-based programs participated in a neighborhood cleanup effort focused on a stretch of Bay Street, a major thoroughfare near the Staten Island Ferry. Yuliya Khripunkova, Regional Director-Workforce Development with AHRC NYC’s Employment and Business Services, invited her colleagues and people supported to join in on the borough-wide event organized by the Richmond County District Attorney and the Staten Island Borough President’s offices.

“No one else is picking up the trash,” Yuliya said. “We are one of the only businesses still open on this stretch. It’s up to us to make it beautiful.”

Months, even years, worth of garbage had piled in the area around 25 Victory Boulevard, where EBS-Staten Island has been based for some time. The program is moving down the block in a few weeks to 136 Bay Street in the same vicinity as the old office. Many storefronts are been abandoned since the pandemic began, resulting in an increase in refuse with no one around to pick it up. 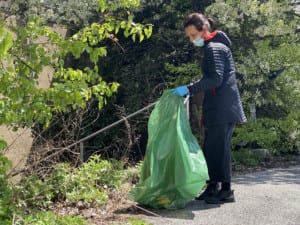 Michael E. McMahon, Richmond County DA, and the Staten Island Borough President, Jimmy Oddo, asked people from across the borough to chip in where they could to make their local area cleaner and prettier.

“We are thrilled that the community has taken the initiative to invest in Staten Island by cleaning up our litter-ridden neighborhoods,” said Borough President Oddo. “While I believe littering is a self-inflicted problem on Staten Island, it is always great to know that people are reaching out to help because they care about the places they live. I applaud their efforts and encourage others to get involved too.”

The group started by picking garbage in the wooded parking lot behind 136 Bay Street. Gabriela Moran and Andrew Cole, Community Support Professionals, joined Blake Eagel, Dana Johnson, and Jaclyn Tirone in picking up multiple bags of garbage surrounding the trees and grass in the lot. 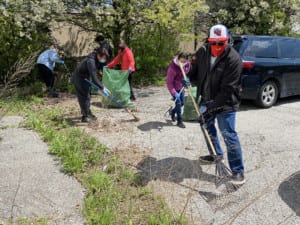 Blake Eagel and others straightened up the parking lot.

Alyssa Ryan, Social Worker, and Jessica Waardal, Coordinator for Academics, tackled the parking lot’s chain-link fence facing Central Avenue. Yuliya and others focused their efforts on the buildings around 25 Victory Boulevard and the landscaping around the new facility on Bay Street.

Omari DeJesus, the Office Administrator at EBS-SI, first cleaned the back-door area of the new building before helping others on Central Ave. “This looks like the first time someone has cleaned back here in many years,” Omari said. “If we work hard and clean it right now, we won’t have to do it again or work as hard to clean next spring. I’m a lifelong Staten Islander. I want to make this place feel more like home.”

The group’s efforts did not go unrecognized. “Community-led cleanups are crucial to keeping our streets safe, clean, and healthy,” said DA McMahon. “I am proud to have supported this most recent clean-up with AHRC New York City, and we look forward to many more events through our anti-litter initiative to help improve the quality of life we all enjoy on Staten Island.” 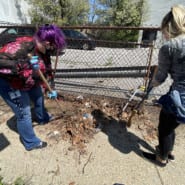 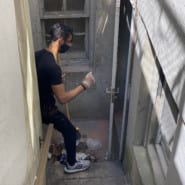 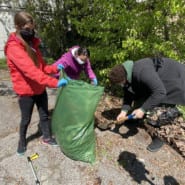 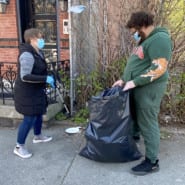